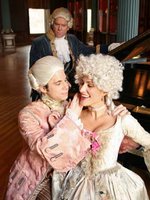 As the old joke goes, when Mozart was my age, he’d been dead 28 years. In a mere 35 years of life, he composed so many pieces of music that it was not until 1862 (70 years after his death) that Ludwig von Kochel finally catalogued them all into a 551 page book. It’s enough to give a person an inferiority complex.

The composer was a bundle of contradictions, at the same time a child prodigy who never really grew up and who was reportedly loud, obnoxious and vulgar, and a brilliant musician who produced some of the most beautiful, profound, and memorable music of his day.

There are also contradictions in reports of his life. The manner of his death is a matter of debate. His burial place is unknown.

In the story of this multi-faceted genius, Peter Shaffer saw a great theatrical piece and his “Amadeus” was written in 1977 and first performed in London in 1980. It won 5 Tony awards on Broadway and the 1984 movie won 8 Academy Awards. The original stage work has undergone six revisions and the Sacramento Theater Company is presenting the latest version.

The story tells of a questionable relationship between Mozart and a lesser court composer, Antonio Salieri. It focuses on Salieri’s seething jealousy and hatred of the young genius, and his decision to destroy him. In actual history there is question of whether the two ever met, but it is of little consequence because Shaffer has made it a heck of a story.

Salieri is at the center of the work, the play beginning on what he says is to be the final night of his life. The action is mostly done in flashback, with occasional returns to the present as Salieri ticks off the remaining hours of his life.

Matt K. Miller may be playing the role of his life. He is simply magnificent as the tormented Salieri, making deals with God and then, when he feels the deals go sour, turning his back on God and embarking on a campaign to drive his nemesis to ruin. Salieri is on stage throughout the entire play, frequently delivering lengthy rapid-fire discourses. It’s an actor’s Olympic event and Miller handles it like the pro that he is.

Derek Manson as Mozart is brilliant. He is very funny as the raucous, raunchy, spoiled wunderkind. But this is a man who spent his early years accompanying his father, being presented and performing for royalty, so he knows what is expected to succeed at court and he is able to change in an instant to a courtly gentleman, eager to please his emperor (Philip Charles Sneed).

As Constanze Weber, Saffon Henke nicely rounds out the trio of exceptional lead actors, as captivating as the innocent, giggily young girl being courted by “Wolfie” as she is effective as the life-weary wife, struggling to find enough money to feed her family.

The set, designed by Marion Williams, is perhaps more opulent than STC audiences are accustomed to, with its rich wood balconies and crystal chandeliers. Portions of the set move to partition off certain areas and it is hoped that the set crew can learn to do it a bit more quietly as the run progresses.

Clare Henkel is credited with costume design, working with costumes rented from the Ashland Shakespeare Festival. The look is luxurious and beautifully gives a feel for the period.

The recorded music (sound designer is Ned Jacobson) worked in some cases, not in others. During Katherine Cavalieri’s first act performance, she makes no attempt to lip synch to what is being played and, as her face is visible to the audience (though she is facing the emperor, who is seated upstage), the whole thing looks awkward and was distracting. By the same token, the choruses conducted by Mozart later in the play work quite well.

Lighting designer Pamila Z. Gray's design included (the pre-show talk informed the audience) over 300 light cues and nicely run the gamut from warm ambient lighting to spotlighted segments that set the actor off from the actual action on stage.

Director Peggy Shannon has created a gem of a production, opulent by STC standards, professional in every aspect, and certain to delight audiences. As the 250th anniversary of the birth of Wolfgang Amadeus Mozart rolls around, the Sacramento Theater Company’s production of “Amadeus” is a beautiful gem to add to all of the other observances in honor of the composer which are taking place worldwide.
Posted by Bev Sykes at 12:10 PM

I saw was lucky enough to see Amadeus on Broadway with Ian McKellan, Tim Currry & Jane Seymour when I was 11 or 12 and I remember it very clearly. It was a fantastic play...I always wondered why there hasn't been a revival of it here.

I guess it's because people want to see those damn jukebox musicals. I hate those. I really, really do.