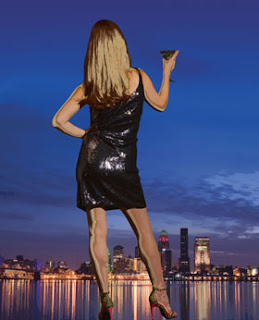 When the lights went up during the intermission for Capital Stage's production of "The Scene," the audience was exhausted.

For starters, Capital Stage newcomer Elena Wright plays Clea, a vapid young woman who is, like, from Ohio, you know, and who is just, like, so excited to be a part of the New York social scene. ("I mean, mind-blowing, right? It's just so surreal, the lights and the water, it's like, unbelievable.")

Clea first meets Charlie (Scott Coopwood) and Lewis (Ken Figeroid) on the balcony of a rooftop apartment on Manhattan's upper west side, where all three have come for a breath of fresh air, to escape the party-goers inside.

Wright is mesmerizing as she babbles on and on and on and on in Valley Girl-speak about her infatuation with this new life in the Big Apple, while Charlie and Lewis roll their eyes and laugh behind her back.

Charlie is a bitter, down-on-his-luck, angst-filled actor who has come to the party against his will, to talk with an old acquaintance about a possible part in a new TV sitcom. Tony Shalhoub played this role on Broadway, but it's difficult to picture anyone else in the role while watching Coopwood's powerful performance ... especially TV's "Monk."

Coopwood bestrides the stage like a Colossus, and dominates any scene in which he appears. He has his own huge chunks of dialogue, including one very funny description of his eventual meeting with his old nemesis, a director, who was "on his cell phone a full five minutes before he can even say hello ... while I sit there grinning like a schmuck, it's OK, man, I know you got to hang on this endless phone call 'cause you're so f*ing important; you're a completely essential piece of the whole mind-numbing motor that keeps capitalism itself running."

Christina Anselmo, another Capital Stage newcomer, plays Stella, Charlie's wife. She's a TV talk show talent booker who has been supporting her husband for a very long time, and their marriage has suffered as a result. She hates her job, and the spark is long gone from the marriage, although they still get along and enjoy a laugh at the thought of Charlie's meeting with Clea.

"She looks good in black and can't speak the English language. She'll do just fine in Manhattan."

Figeroid's Lewis is the perfect perennial third wheel to Charlie and Stella. We don't really know anything about his life, other than that he's been secretly in love with Stella for years, but wouldn't dream of moving in on his friend's wife.

As the play progresses, we realize that these are four very unlikable people: all living shallow lives and feeding off each other, depending on their own needs.

The affair between Charlie and Clea is inevitable, as the sparks fly and passions ignite. Charlie is emotionally needy; Clea will sleep with anyone if she thinks it'll do her some good. When it all comes to an inevitable abrupt halt, she gives no thought whatsoever to having heartlessly destroyed Charlie's life.

Theater groups all over the country are struggling during these difficult economic times; audiences are carefully picking and choosing where their entertainment dollars will be spent. Capital Stage gives a lot of bang for the buck, and this new show is no exception.

The company's ticket prices are some of the most reasonable in the area for an equity house, and the productions always are of the highest caliber.

"The Scene" definitely is a winner, and well worth the price of a ticket.
Posted by Bev Sykes at 4:21 PM