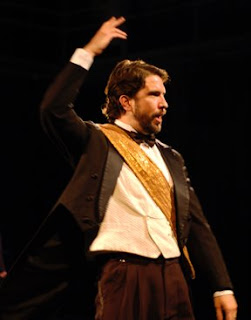 Monarchs and Gypsies and bears ... oh my!

'The Winter's Tale,' continuing through Sunday at the Mondavi Center's Studio Theatre, is a less familiar Shakespeare work. But this production, under the deft hand of director Patricia Miller, makes one wonder why it isn't done more often.

I hadn't seen the play before, and therefore had none of the expectations that might have accompanied another production of, say, 'Hamlet' or 'Macbeth.' This was, as a result, a delightful voyage of discovery. The journey starts with a visual bang and continues until the final beautifully lit, tender reunion of the king and his long dead wife.

Jorge Luis Morejon makes an immediate impact as 'Time,' aided greatly by Wenting Gao's striking costume, as this mystical character sets the scene for the story.

'The Winter's Tale' concerns King Leontes (Brett Duggan) of Sicilia, who becomes irrationally jealous of the innocent affection between his wife, Hermione (Allison Minick), and his best friend, Polixenes (Kevin Ganger), the king of Bohemia. We never quite figure out what has caused this seemingly sudden jealousy, but Leontes is convinced that the child Hermione carries was conceived by Polixenes.

Duggan gives a powerful, polished performance as a man who has tyrannical rages against his wife and her friend, Paulina (Amy Louise Cole), who attempts to reason with him. His anguish over Hermione's perceived betrayal is palpable; his tirades are frightening. His anguish - 16 years later, when he eventually realizes that no betrayal took place - is just as wrenching, as he finally comprehends how he has ruined his own life.

Minick gives a moving performance as Hermione, at first perplexed at her husband's accusations of infidelity, then pleading for reason from this man she so clearly loves. Her magical return - years later, in the form of a statue come to life - is strikingly beautiful.

When Hermione gives birth to a daughter, Perdita, her best friend Paulina brings the child to the king, certain that the sight of her will soften his heart.

Amy Cole gives an impassioned performance as Paulina, the catalyst for all the magic that happens throughout the play. Her scene with Leontes, as she tries to make him accept his daughter, is particularly moving.

Kris Ide is endearing as Antigonus, Paulina's husband, a conflicted lord who is unwaveringly loyal to his king, but also unable to stand up to his wife. Antigonus is dispatched by Leontes to 'dispose of' the child.

Christina Moore is wonderful as Mamillius, the young son of Leontes and Hermione. Moore is so convincing as a young boy that I had to check her bio, to verify she truly is an adult actress.

In a gender reversal, Steph Hankinson plays Camila - Camilo, a male role, in the original - who is sent by Leontes to murder Polixenes, but instead warns the king and flees the kingdom with him.

The action in Act 2 takes place 16 years later, in Bohemia, where the young princess Perdita (Gia Battista) has grown up, having been adopted by a shepherd (Heidi Kendrick) who found the abandoned infant. Perdita is in love with Florizel (Chris Jee), the son of Polixenes.

Kendrick does a credible job as the old shepherd, but never quite loses the appearance of a woman pretending to be a man. The shepherd and his son, Clown (Mark Curtis Ferrando), bring a bit of humor to the play, although some of their dialogue is difficult to understand.

Daniel A. Guttenberg is larger than life as the rogue Autolycus, who travels the country selling his wares and picking pockets. He, too, lightens the play's mood, and does it well.

Instead of choosing a more traditional Elizabethan sound for this production's music, Miller worked with composer Daryl Henline on original themes with a Balkan sound. The result could not be more perfect for the gypsy celebration.

Josh Steadman does a beautiful job with the scenic design, creating two entirely different worlds: a posh 1930s look for Leontes' court, and the more rustic Balkan community of Bohemia.

Gao's costumes are elegant for Act 1, and they beautifully depict the life of shepherds and gypsies in Act 2.

Jacob W. Nelson's lighting design creates the appropriate mood and is particularly good in the statue scene, where the 'statue' of Hermione seems to glow.
Posted by Bev Sykes at 1:48 PM