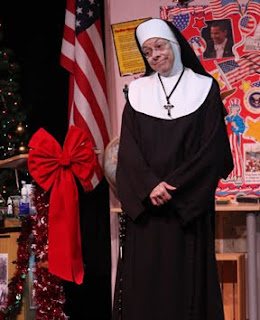 People with little or no Catholic school education will have a much easier time getting into 'Sister's Christmas Catechism,' the newest offering at Sacramento's Cosmopolitan Cabaret, than its previous production of 'Sister's Late Night Catechism.'

That first show included many hilarious bits, most of which assumed that the people in the room were familiar with how things were done in Catholic grammar schools back in the day.

'Sister's Christmas Catechism' is the third in a series of very funny shows written by Maripat Donovan, all of which revolve around a no-nonsense nun pressed into teaching the basics of the Catholic faith to adults. This Christmas version, which continues through Jan. 3, includes a living nativity; preparation for this sequence comprises most of the second act, and must be seen to be appreciated.

Sister (Nonie Newton-Breen) plucks various willing - and not entirely willing - souls from the audience for this scene. She then costumes them in makeshift outfits cobbled from donations to the poor.

It should be noted that while almost all theatrical productions caution audiences against the taking of photographs, here everybody is encouraged to take pictures. Be sure to bring your camera; you'll be sorry if you leave it at home, especially if members of your group become part of the living nativity.

On the evening we attended, the ox was played by a well-known Davis police officer, which made things much more fun for us. (Following the show, he told me that he was glad not to have been picked to play the ass.)

The Christmas tableau doesn't merely tell the tale of the birth of Baby Jesus; that would be too ordinary. Instead, Sister has decided to solve a mystery that has long plagued her. This will be a sort of 'CSI: Bethlehem,' she explains, as she attempts to discover who stole the Maji's gold.

She points out that Mary and Joseph surely used up the myrrh and frankincense, but the gold must have been stolen because otherwise Joseph could have paid for a room in the inn, and gotten them out of the stable.

Newton-Breen, who has traveled the country in 'Catechism plays' for the past seven years, is well equipped for this role, having been born into a large Irish-Catholic family in Chicago. Since these plays rely heavily on audience interaction, her improv work - beginning with Chicago's famed Second City Theater - has served her well.

She also won the 2006 Ovation Award for her performance in this particular show.

While she makes an excellent nun, she's far less strict than Maripat Donovan - who starred in 'Sister's Late Night Catechism' - and isn't nearly as insistent as Donovan, at making us respond 'Yes, Sister' to every question. Newton-Breen isn't nearly as scary.

Each performance of 'Sister's Christmas Catechism' includes the assistance of a local church choir. The opening night performance featured the Holy Family Catholic Church in Citrus Heights, one of whose priests also participated in the nativity tableau, and definitely knew how to chew up the scenery!

This show is a lot of fun. If you were put off by the esoteric parts of 'Late Night Catechism,' don't let that leave any second thoughts about attending this one.
Posted by Bev Sykes at 8:35 AM

Thanks for the lovely review but, please note, the original play was "Late Nite Catechism". Don't feel bad since Sister says that The Apostle's Creed was written at the Council of Nicea.