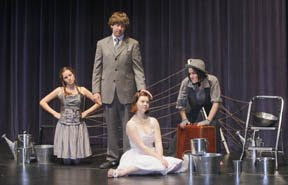 The tragedy of the Greek god Orpheus has been told for as long as storytelling existed. The modern age has offered plays, operas and at least 30 films about Orpheus in many countries, from the United States and Japan to Czechoslovakia and Brazil.

It's the familiar story of love lost, found and lost again.

Orpheus' lover/wife Eurydice dies/is killed and goes the Underworld, where she's lost to Orpheus. He somehow finds a way to descend, to entreat the gods with his music and to achieve the release of Eurydice. But the permission includes a disclaimer and, of course, the rules are broken ... and Eurydice is lost forever.

Until playwright Sarah Ruhl came along, though, the story (probably) hadn't been told from Eurydice's point of view. Thanks to Acme Theater Company and director Emily Henderson, that omission has been corrected.

Ruhl's father's death in 1994 eventually inspired her one-act play, which was written in 2000.

By focusing on Eurydice's experience of her own death, and her journey into the underworld, we learn that she has been reunited with her father in Hades.

This father's love for his daughter is so strong that although the dead quickly forget their worldly attachments, he remembers his daughter; he seeks to get messages to her, during her lifetime. And, after her death, he reminds her of their relationship.

This Acme production has a strong cast. Hope Raymond and Torin Lusebrink, as Eurydice and Orpheus, have a warm and loving relationship. Their pre-marriage romps are full of joy, and are a delight to watch. Lusebrink is less effective later, in portraying Orpheus' anguish at the loss of his wife; he seems to focus more on his music than the emptiness with which he has been left.

Zach Salk's performance as Eurydice's father is more controlled than emotional, which may be fitting, given that he's dead. Sam Wheeler pulls out all the stops in his frenzied role as the Lord of the Underworld, played more as a petulant child with attention-deficit hyperactivity disorder. (Local bicycle maker Peter Wagner is given program thanks for the loan of his “awesome” bike!)

Rounding out the cast is a Greek chorus of “stones”: Hannah May as Big Stone; Gigi Gilbert-Igelsrud as Little Stone; and Amber Bianchi as Loud Stone.

Because of the nature of their characters, Bianchi and Wheeler are the easiest to understand. This intimate play, with its little cast, would work better in a smaller venue than Davis High School's Brunelle Performance Hall, where the audience area is so vast that many lines are lost.

The performances themselves are excellent, but I saw at least one audience member move closer to the stage after about 10 minutes.

Hannah May's set design is stark and rather bare, but the gray, rock-like curtains nicely delineate different parts of the set. And the method of arriving in the Underworld certainly is unique.

In “Eurydice,” playwright Ruhl is working out her own conflicted emotions about death and the afterlife, based on her Catholic upbringing. That the piece seems confusing at times may indicate that she hasn't yet solidified all her feelings on the subject.
Posted by Bev Sykes at 3:44 PM