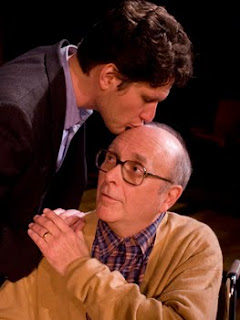 It is crucial for actors to be utterly believable when performing a show like “Tuesdays with Morrie,” Jeffrey Hatcher and Mitch Albom’s adaption of Albom’s best selling book, especially when performing in an intimate setting such as Sacramento Theater Company’s small Pollock Theater. Aaron Wilton (Mitch) and David Silberman (Morrie) succeed beautifully.

Aided by Matt K. Miller’s crisp direction, STC’s “Tuesdays with Morrie” is a show that will grab every heart and that should come with little packages of tissues on each seat. I didn’t see a dry eye in the house (including, in some spots, the actors themselves).

For those unfamiliar with the story, Morrie Schwartz was a sociology professor at Brandeis University, who came into national prominence when he was diagnosed with Amyotrophic Lateral Sclerosis (ALS), also known as Lou Gehrig's Disease, in 1994. The charismatic, if irascible, Schwartz was interviewed several times by ABC’s Ted Koppel (“Nightline”). The broadcasts brought his former student, Mitch Albom, now a sports writer for the Detroit Free Press, back into his old professor’s life.

It was guilt that drew Albom to make a quick courtesy call on his old “Coach,” but the camaraderie between the two was rekindled, and Albom returned the following Tuesday and every Tuesday thereafter. He taped the conversations between himself and the dying man, recording his thoughts on life–and on death. The recordings eventually became the best selling book and spawned several other best selling books by Albom, examining life and the afterlife. The original book also became a made-for-television movie, with Jack Lemmon playing Morrie and Hank Azaria as Mitch.

The play is set in Morrie’s Waltham, Massachusetts living room, designed by Jarrod Bodensteiner and Morgan McCarthy. The room is a testament to Morrie’s minimalist lifestyle, with the walls painted a 1950s green and the furnishings kept to a bare minimum–a recliner and a few books on a shelf. He refers to an unseen television, the original black and white, purchased many years before. He speaks of the irrelevance of “things” and the importance of people.

Stage Manager Suzanne Tyler (who also gives the pre-show talk) helps move bits of scenery around and also acts as the nurse, ministering to the dying man (putting on slippers, moving him into a hospital bed, etc.)

Erik Daniells is credited with the piano recordings used throughout several scenes.

I will admit to having some problems with this play that should do nothing to take away from the actual production or the fine job done by two veteran actors. I loved Albom’s book, but I found that the play seems to concentrate more on Mitch than on Morrie and it is only in the last few scenes where Mitch does not come across as self-centered and a bit obnoxious, a feeling I did not get from the book itself.

Aaron Wilton handles the slow transformation of Mitch as he helplessly watches his dying friend beautifully.

As for David Silberman, he is a delight to watch and so fully embodied Morrie Schwartz that I was moved to come home and check out excerpts of the Koppel interviews on YouTube to see the real man for myself..

Schwartz lays out his five rules for living which include (among many other things) "keep an open heart. Open it up further and further and further until you encompass as much as you can with your love." He also advises people to "be alert and aware to the things that interest you and then go for it. Be involved."

Hopefully that will be the message that people will take away from this production, once they have dried their eyes and blown their noses.
Posted by Bev Sykes at 10:36 PM