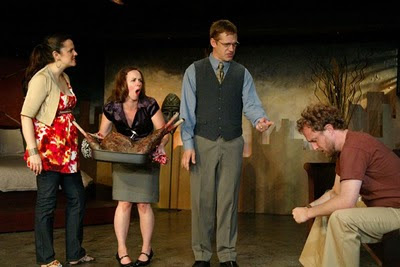 It’s time for the annual dinner that Bay Area foodies Richard and Pam (Cassidy Brown and Kelley Ogden) are throwing for long-time friends Tom (Jonathan Rys Williams, who also directs) and Wendy (Katie Rubin) to celebrate their mutual anniversaries. This year lamb is on the menu.

There’s only one little problem – the lamb (Carl is his name) isn’t dead yet.

Richard, a gourmet cook, needs to raise the bar each year at these dinners. Last year he cooked a turducken (chicken inside a duck inside a turkey) and this year he’s slaughtering a lamb, trying to follow the directions in his “Joy of Cooking,” which indicate that the very best lamb should be “as the blood has just stopped. Caught in the muscles. Swishing. Unsure. ‘Where do I go now,’ it wonders?”

Richard needs Pam’s assistance as the two lean into the box toward the unseen, but apparently resisting lamb. “The holder,” he tells her, “calms the lamb, much like a mother calms her babe. A soft caress, a scratch on the nose, stories of magic and happiness softly cooed into the ear steady the throat and relax the soul to help assure a clean cut.”

It’s such a great visual, that without any sight of lamb or blood, the audience is repulsed again and again, while all the while convulsed at the hilarity of the scene.

Character personalities are established very early. The decor of Pam and Richard’s apartment immediately puts us in a jungle-type motif, which perfectly complements Richard’s cave-man attitude about killing the food he is about to eat. Pam seems the exact opposite, a timid thing, appalled by the thought of actually killing a lamb, but falling into and participating in Richard’s fantasy.

Brown and Ogden are both making their Capital Stage debuts in this production and each is outstanding. Brown is bigger than life, striding about the stage making his he-man statements, while Ogden, who has the biggest eyes ever is at once repulsed by his ideas, but head over heels in love with him. She’s a great physical comedienne.

The doorbell rings and Wendy arrives, full of anger, stating that Tom is parking the car. She explains that she is still suffering “some residual road rage from the car” and adds that some of their worst moments as a couple are in the car.

Rubin is deliciously over the top as Wendy, earthy, sensual, and so much more attuned to Richard than Pam. She is positively orgasmic in her description of his cooking and in the reaction to the smell of Carl baking there in the kitchen. There is an obvious spark between Wendy and Richard, which we just know is going to explode later in the evening.

When Tom arrives, he is a Caspar Milquetoast-esque man, uncomfortable in his body, and still in the throes of his argument(s) with Wendy. There is great rivalry between Tom and Richard, an annual physical besting of Tom by Richard, which Richard sees as a contest, and Tom does not.

Steve Decker gets high marks for his opulent set and lighting design, which put us in mind of an African savannah before the action starts, all nicely complemented by Brad Thompson’s lush sound design.

Hunter Gatherers is a delightful evening sure to leave everyone laughing.
Posted by Bev Sykes at 11:54 PM

Hi, nice blog & good post. You have beautifully maintained it, you must try this website which really helps to increase your traffic. hope u have a wonderful day & awaiting for more new post. Keep Blogging!