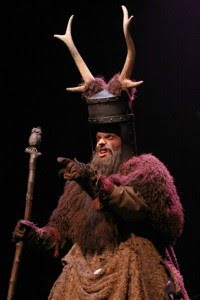 (The program is responsible for the “rip off” designation, although since the play is written by Eric Idle, an original Python, I'm not sure if that's exactly accurate!)

To confess a deep-dark secret, I wasn't a Monty Python fan, although I've seen odd bits here and there, and one or two of the films. But I never saw “Holy Grail,” nor did I memorize lots of favorite skits from the 45 television episodes. I barely know what the parrot sketch is.

So as I wandered through the halls of the Wells Fargo Pavilion, surrounded by people wearing T-shirts with Python quotes, and as the man in the seat next to me began laughing uproariously before the action on stage had really even begun, I wondered how a noncognoscenti would enjoy the show.

Well ... there's a lot to like, and even if you're not exactly liking it, just trying to figure out the frenetic action on stage will keep your mind occupied!

The plot, if it can be called that, traces King Arthur's search for the holy grail — the cup from the Last Supper — but at its core, this show is just two hours of cheap shots, fart jokes and lowbrow humor.

All of which the devoted audience absolutely loved.

The Historian (Steven Strafford) sets the scene with the precision of a weatherman: “In Guinard, Palace and Difford, plague. In the kingdoms of Wessex, Sussex, Essex and Kent, plague. In Mercia and the two Anglias, plague, with a 50 percent chance of pestilence and famine coming out of the northeast at 12 miles per hour.”

Following his announcement that this is “England,” the stage is filled with brightly costumed dancers singing about Finland. They hit each other with fish in the delightful “Finland/Fisch Schlapping Dance,” until the Historian reminds them that the setting is England, whereupon the dancers leave the stage, disappointed.

This pretty much sets up the type of tomfoolery to follow.

The actual story begins with the entrance of King Arthur — Tony Award winner Gary Beach, most recently seen on the Music Circus stage in last summer's “Guys and Dolls” — who announces his search for knights for his Round Table. Arthur, assisted by his sidekick Patsy (Andy Taylor), sets off on this quest; they encounter ridiculous setbacks along the way, riding nonexistent horses and using coconuts to make the noise of the clopping hoofbeats.

Director Glenn Casale has assembled a first-rate cast for all this silliness. Mika Duncan, playing Lancelot, is a veteran of the show's Broadway and Las Vegas productions. Steven Strafford, as Prince Herbert, also was part of the Las Vegas cast. Ron Bohmer, who recently starred on Broadway as “Father” in the revival of “Ragtime,” is Sir Galahad.

Ron Wisniski, a Music Circus favorite, is Sir Bedevere (the first of his four productions with Music Circus this summer).

The Lady of the Lake is played by the delicious Lesli Margherita, fresh from her award-winning performance in London's West End production of “Zorro.” Wearing a succession of beautiful gowns (costume design by Tim Hatley), Margherita is Idle's tribute to Andrew Lloyd Webber, as she belts out arias like “The Song that Goes Like This”: “That's the trouble with this song/It goes on and on and on/For this is our song that is too long.”

You'll also hear a song plucked from Monty Python's “Life of Brian” (“Always look on the bright side of life”).

Newbies like me may not have roared with laughter at the first “ni” uttered by the dreaded “Knights who say Ni,” but this show's pace is so fast that just about the time you're scratching your head, wondering why a given bit is funny, something else will have you guffawing.

“Spamalot” is a fun evening, with lots of laughs. Judging by what I saw around me, it'll more than satisfy all Python fans.