reasons to be pretty 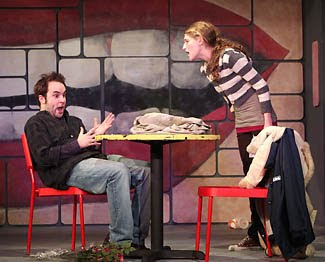 Beauty may be only skin deep, but according to playwright Neil LaBute, author of 'reasons to be pretty' (lower case letters his), now playing at Capital Stage in Sacramento, that may be enough.

'reasons to be pretty' - directed by Janis Stevens -is a very black comedy that tells the story of four rather plain people. Steph (Stephanie Altholz) is a hairdresser, while her boyfriend Greg (Cole Alexander Smith), Kent (Chad Deverman) and his wife Carly (Allison Rich) are in go-nowhere jobs in a box factory. Greg is really the good guy and if there is a bad guy it would be Kent, who sees himself as a stud and who is proud of having hooked the beautiful Carly.

The whole play revolves around something slightly negative that Greg said to Kent about Steph's appearance. He called her appearance 'regular.' Carly reported the incident back to Steph and as Act 1 begins, Steph is in a blind rage, using more f-words per minute than an episode of 'The Sopranos.'

Through of all Steph's rage, Greg is clueless about why this is such a the big deal and why he's in so much trouble. Steph sees Greg's remark as indicative of everything that is wrong with their relationship. She feels that if he loved her he would consider her beautiful, even if she wasn't - she should be beautiful to him. Feeling she is only 'regular' compared to other women is the unkindest cut of all, though Greg continues to plead that he loves her looks.

As Steph's anger intensifies, she is throwing clothes into a suitcase, ultimately declares an end to their four-year relationship and storms out.

Unlike men in other LaBute plays, Greg actually acknowledges his weaknesses and is wracked with remorse over the fact that he has hurt Steph so much. In fact, he spends most of the play trying to get back in her good graces, though she feels he has committed an unforgivable sin.

As time passes, Greg, a voracious readeer who reads Poe and Hawthorne during his breaks, has to learn not only to live with Steph's decision, but to tolerate the increasingly boorish behavior of the muscular Kent.

Though married to Carly, Kent is also not above getting a little something on the side, if ya know what I mean (wink-wink, nudge-nudge). He brags about his affair with the new office hottie and asks Greg to keep his secret.

Carly is pregnant and Kent believes she should get herself to the gym the day after giving birth so she can keep her good looks. ('Carly's getting kinda rubby now, but that's sort of cute, too. Never seen her with an ass like that before. ... I'll put up with it, though. For now. Long as she hits the gym like the day after the delivery, we're all fine.')

He expects Greg to keep quiet about his affair, which, initially, Greg does.

The two come to bloody blows, however, when Greg finally declares he'll no longer provide an alibi for his friend.

The four actors in this piece know their characters well. Smith's Greg is the guy you want to like. He's an ordinary, decent man who is trying to do the right thing, and trying to learn from his past mistakes.

Deverman is the perfect blue-collar worker who thinks he's God's gift to women. He swaggers around the stage, preening, convinced he is every woman's dream.

Altholz deftly shows Steph's anger, her humiliation and the difficulty she has with her continuing love for Greg, though she's unable to forgive him for his remark.

Rich shows the insecure, vulnerable side of Carly, as she confronts her suspicions about her husband's infidelity.

Jonathan Williams has designed an ingenious set that is able to convert from bedroom to office break room through the use of various openings set in the back wall.

Though 'reasons to be pretty' may not itself be pretty, it's a fine performance by four talented actors and another interesting, thought-provoking show for Capital Stage.
Posted by Bev Sykes at 2:36 PM