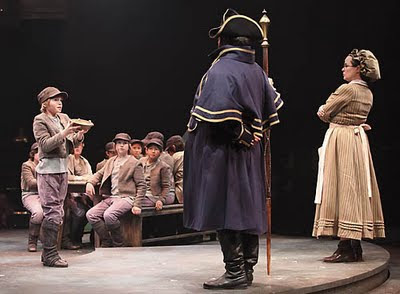 The last production of “Oliver!” at Music Circus was in 1997, but it is back for a huge extravaganza this week.

Directed and choreographed by Richard Stafford, this production has a cast of nearly 60 which, at times, on the small Music Circus stage looks like rush hour in London.

Christopher Bones has the title role and is a wonderful young actor. His “Where Is Love” was clean and clear and true, without a wobble, even in the high notes. He effectively conveys the loneliness of an orphan who has never known love, his fear of the people who are out to do him harm, and his joy at the possibility of having a real family of his own.

Veteran actor Ron Wisniski has a great time as Fagin, the leader of a band of lost boys whom he teaches to pick pockets. Wisniski has a list of national credits to his name and also has been seen in many Music Circus productions. He’s a first-rate Fagin.

Jacquelyn Piro Donovan is outstanding as Nancy, lover of the cruel and abusive Bill Sikes, a woman who takes a liking to Oliver and attempts to be his protector. Donovan can belt out a song with the best of them, but also can bring a gentle vulnerability to her songs, when expressing her love for Sikes.

I must speak up for Sykeses everywhere and say that while the name is spelled with a “y” in the Music Circus program, traditionally it is spelled with an “i.” (I am always quick to point that out, for obvious reasons!)

Aaron Serotsky sings the heck out of the Sikes character, but was not as menacing as others I have seen.

Matthew Gumley, who was last seen at Music Circus as the adorable Winthrop in the 2006 production of “The Music Man” (whom I described at the time as “one big ball of talent”), has only improved since that production. He gave the Artful Dodger a real panache and the stage came alive whenever he was on it.

This is a good place to insert that the choreography for this show is performed very well, but is at times overly ambitious, especially for such a huge cast. It almost seems as if there was an attempt to make a movement for every line of music when sometimes less might have been more.

That said, however, whenever Gumley was singing, he made all of those hand and foot gestures sizzle and I stopped trying to decide if this was too over the top or not.

In smaller roles, Roland Rusinek as Mr. Bumble and Karen Culliver as the Widow Corney were quite good, while Shannon Stoeke and Cynthia Ferrer as Mr. and Mrs. Sowerberry, the undertaker and his wife, were exceptional.

Paige Silvester, whom we have watched grow up on Sacramento stages, was adorable in the small part of Nancy’s young friend Bet.

This is a show where the first act is much better than the second. There is so much to get into Act 2 that it all seems to tumble together every which way. In a stage-in-the-round situation, the final scenes just become a jumble of people not being where you think they are going to be, making entrances and exits where logic tells you they shouldn’t be.

The show doesn’t seem to come to a finale so much as it does to slide to a stop.

There are also some changes in this production. The addition of “That’s Your Funeral,” not always included in the show, was fun. I missed my favorite line — “if you pass by the Tower of London, have a look at the crown jewels for me,” and the addition of Dodger to Fagin’s final scene was something I have not seen before and added a touch of lightness that was unexpected.

My criticisms of this production are slight and perhaps overly nit-picking. The average theatergoer will absolutely love it. This is a perennial favorite and Music Circus serves it up beautifully.
Posted by Bev Sykes at 2:04 PM