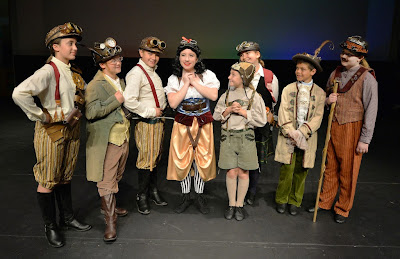 Several years ago, I wrote a feature article about the opportunities for children to participate in theater in this area — groups like the Woodland Opera Company’s Rising Star Workshop and Youth Summer Theater Camp, and the Davis Musical Theatre Company’s Young People’s Theater program. They’re active programs that have only grown since my original article. So I decided to check the finished product for both Woodland and Davis.

A few weeks ago, I reviewed Woodland’s “A Year with Frog and Toad,” and this weekend I went to see DMTC’s “Snow White and the Seven Dwarfs.” I was pleased to see that both shows were an excellent example of the kind of theater experience young people are being given.

“Snow White” — with books, lyric and music by Carol Weiss, who writes musicals for children — is not Disney’s “Snow White.” For starters, there are dwarfs Keeper, Grinder, Cutter, Woeful, Muse, Picker and Poker. Also, the mirror plays a major role throughout the story.

The DMTC cast has 30 or so young people, ages 7 to 18, and is directed by Kendra Smith, who has done an excellent job showcasing a disciplined, talented cast.

Choreography by Jessica Arena and Jan Isaacson is impressive and the kids perform beautifully. The Act 2 starter, “Every Deed You Do” was outstanding and could easily stand on equal footing with any community theater stage, adult or young people, in the area.

Director Smith had told me that this production was to be done in steampunk style and I admit I had to research it. Huffington Post tells me, “It’s all about mixing old and new: fusing the usability of modern technology with the design aesthetic and philosophy of the Victorian age.”

The look abounds everywhere, in the costumes (particularly the hats) and in the set (designed by Stephen Giannetti).

Becca Paskowitz is a commanding Queen, her performance impressive in one so young (15). She also has a beautiful voice and, though this is a huge part, she carries herself like a pro throughout.
Her sister, Witch Wicked, is played by 15-year-old Cassidy Smith, who is every bit as impressive as Paskowitz. The two make an evil pair to be reckoned with and are more central characters than Snow White herself.

Snow is played by Isabelle Giannetti, a lovely, innocent girl whose only fault is being too beautiful. Giannetti handles the role beautifully.

Tylar Traum is the Mirror, a character dressed in silver standing inside a big frame, who communicates with everyone only in rhyme, and occasionally steps out of the frame to have a more personal confrontation. Traum was a delight to watch.

Jonthan Kalinen didn’t have much to do as the Prince, but in his brief appearances he comported himself well and sang a beautiful “Love Song” with Snow White.

Sir Pompous is the Queen’s cousin and Anthony Swaminathan shows a real comic flair in portraying this bumbling royal.

Jack Driggers is Keeper, the head dwarf, and does a good job with this small role, while Nate Fechner as the dwarf Woeful seems quite subdued until near the end when he shines wonderfully.

There are many other members of the YPT as ladies and gentlemen of the court, and the younger members play birds, bears, foxes, hedgehogs, as well as a rabbit, a fawn and a skunk. The ensemble works well together and it is wonderful to see how much they have learned in the Young People’s Theater.

“Snow White” continues through May 24. I saw it on the second weekend and the house was nearly three-quarters full, so it is obviously quite popular. Children especially will have a great time and might get bit by the performing bug themselves when they see how much fun everyone is having on stage.