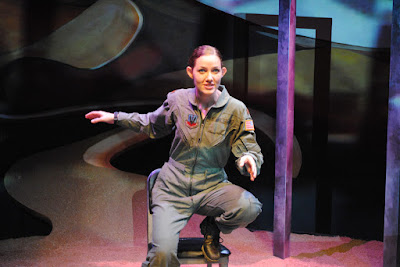 The lights in B Street’s small B3 Season theater go up to reveal Alicia Hunt, The Pilot, in the current production of “Grounded.” She stands tall and proud with eyes shining, because she has just completed a bombing run.

She dares you to take your eyes off of her as she strides around the stage. She exudes confidence and pride that she, a woman, is a Top Gun in the male-dominated Air Force. She is accepted as one of the guys. They go up in their planes, hit their targets and then go to the local bar to drink together, the camaraderie of soldiers in a war.

She revels in her love of “the blue.” She is proud of the “blood and sweat and brains” she has expended in earning her uniform, and she speaks with excitement as she talks of delivering her deadly payloads, “pounding minarets into dust.”

She is a loner, she explains, because men are usually intimidated by her job, but then one night she meets Eric, who is not intimidated. They start seeing more of each other and the inevitable happens: She’s pregnant.

She can’t fly pregnant, and the Air Force grounds her and assigns her to what she calls the “Chair Force,” doing office work. After she marries Eric and gives birth to daughter Samantha, she stays at home to be with the baby for three years.

Eventually, the job of a housewife and stay-at-home mom is no longer enough and she starts yearning for the blue again.

With Eric’s blessing, she returns to her unit, expecting to be reunited with her beloved F-16 fighter plane. But she discovers things have changed. She will no longer be flying a jet over the desert, she will be sitting in an air-conditioned trailer in the Nevada desert piloting a drone flying somewhere in the Middle East, while looking down on her targets and getting orders from a disembodied voice in her ear.

She no longer lives in the blue, but in the “gray” of the drone room. She gets up in the morning, feeds Samantha and takes her to school, then drives an hour to the trailer, works her 12-hour shift blowing up “bad guys” in the desert, then is home in time for dinner and to put Samantha to bed.

There is no more camaraderie and she can’t even share her work with her husband because it’s all top-secret. She no longer feels the power that she felt when flying a plane and under constant threat of death.

The longer she does this job, the more surreal it seems, especially when she discovers that she now sees her targets much too clearly, watching body parts fly into the air as the bombs explode. This brings up a very real question for those of us watching about modern warfare, where kids are just playing video games … but with real lives. It definitely has an effect on our Pilot.

This is a masterful, emotionally charged performance by Hunt, an Equity actress working in Los Angeles and New York, who is a Davis native. She grew up in the Acme Theatre Company, Barnyard Stage, Davis Musical Theatre Company and at other local performing venues.

Director Lyndsay Burch keeps things focused with no lag time in the crisp dialog of The Pilot.

If there is a negative to this production it is the scenic design by Samantha Reno. There is a large cartoon-like sand dune sweeping across the back of the stage, looking somewhat like Donald Trump’s hair, which might have worked well except that video projections are an important part of this story, and they tend to get lost in the busy-ness of the backdrop.

It was a shame to lose so much of that part of the show.
Posted by Bev Sykes at 2:29 PM