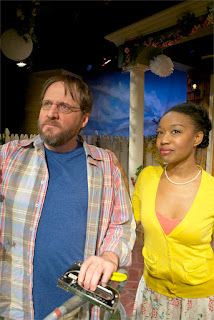 “Echo Location” is the third play by Carter Lewis to premiere at the B Street Theatre, behind “Women Who Steal” and “While We Were Bowling.” This 90-minute one-act play is directed by Buck Busfield.

Billed as a hilarious comedy, it’s not quite that, though there are some very funny lines and situations and the actors make the most of them. But there are dark overtones and things that don’t quite make sense, if examined too closely.

Benjamin Rindell (Kurt Johnson) is a white English professor about to be married to African-American Emmy (Mary Lynne Robinson). As the play opens, they are sitting in the gorgeous back yard of their home (sets by Sam Reno). Emmy is decorating for their upcoming nuptials while Benjamin sits wracked with angst about past events and a recent indiscretion.

In attempting to enter the home of Emmy’s boyfriend, Bluetooth Atkinson (Oge Agulue), to remove all of Emmy’s things, Benjamin inadvertently caused the death of Bluetooth’s cat, who leaped at Benjamin and got caught in a ceiling fan and was decapitated. Benjamin has brought what’s left of the cat home in a paper bag.

(First puzzling thing … there is no back story to the romance of these two. Emmy was with Bluetooth for only three months and she is about to be married to Benjamin, before she has even removed her things from Bluetooth’s home. That has to be the quickest marriage decision in history.)

Onto the scene bounds 15-year-old Allison (Sarah Grodsky), with the announcement that she has been told by her recently deceased mother that she is Benjamin’s daughter and she wants a blood test to prove it. The last thing in the world Benjamin wants is a teenaged daughter, especially one who is as assertive as Allison.

Bluetooth arrives, angry about his cat (who has now been relegated to a red-stained plastic container in the freezer). He tries to ignite a spark with Emmy again, and he tells Benjamin that in exchange for his not going to the police about the burglary (and cat death), he will need to beat Benjamin up. Benjamin agrees and they settle on a time later the next day.

The beating bothered me a lot. First, who dresses up in their good clothes to beat someone up? I understand Bluetooth’s need to rid himself of the rage he feels for losing Emmy by hitting his rival, and I understand Benjamin’s need to rid himself of the guilt he feels about not only the burglary and the cat death, and other things that have weighed heavily on him, but the beating seemed unnecessarily brutal, while Emmy and Allison sit in the yard and hold on to each other.

It was a difficult scene to watch and the dramatic lighting added to the brutality of it. It seemed out of place in a comedy.

(I was not the only person commenting about the lighting emphasizing the black-on-white violence.)

Things resolve themselves by the ending and one hopes that Allison and her father actually will have a relationship. One of the sweetest moments in the play is a brief encounter between the two of them.

The performances of all four actors was outstanding. Johnson is a complex man who wants only a simple happily-ever-after and can’t seem to get it. Robinson’s Emmy is a delight as she takes charge and leaves no doubt about her feelings for this man. She is also simply gorgeous in her stylish wedding gown.

Allison is a unique young lady, who, at age 15, finding herself alone, has driven her mother’s truck to find her father. She seems to know what she wants in life but she hasn’t quite figured out the difficulties of an underage girl living on her own. Grodsky is a delight to watch bring this character to life.

Agulue is a tall, strong black man, who plays Bluetooth as a calm man, but who has a lot of anger within him. He is also barely hiding a lot of pain at the loss of the woman he loves. The beating he gives to Benjamin doesn’t come from a place of viciousness, but from a place of righteous indignation and the sense that justice must be administered.

This is still a work in progress and the playwright says he still may be rewriting scenes throughout the run of the play.
Posted by Bev Sykes at 10:43 AM