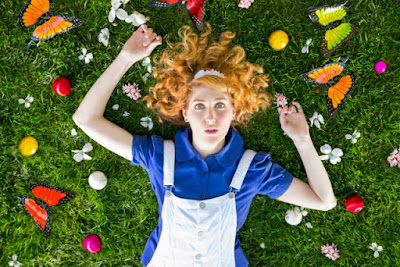 Greg Alexander’s adaptation of “Alice in Wonderland,” now at the B Street Theater as part of the Family Series is billed “for ages 5+.”  They got that right.  The little kids sat entranced and laughed uproariously at the zany antics on stage.

This is not your mother’s “Alice,” nor is it Lewis Carroll’s.  The outrageous frenzy was great for the kids, but wore a bit thin.  The beloved fairy tale turned into a moralistic lesson in 12 step programs, self-help groups, and parenting lessons thinly disguised as life in Wonderland.

Alice is not a little girl, but a petulant, self-indulgent teenager, with lots of food allergies, and glued to her cell phone.  She, with her friends, speaks in Internet-ese and says “OMG!” and “Like-Like-Like!” a lot.  When she follows the White Rabbit she loses first loses her GPS and then her cell phone itself, in strange ways peripherally related to Carroll’s story, and has no clue how to survive.

Ultimately, this becomes a lesson in realizing she had those skills all along (I expected someone to invite her to click her heels together).

The weirdness of the script should not take away from the fine acting by the cast, particularly Stephanie Altholz as Alice, who has developed the annoyingly accurate screeching inflection of a spoiled teenager and John Lamb, in several roles, each one fun to watch, particularly the caterpillar.

Music composer Noah Agruss along with playwright Alexander has written some cute songs, particularly the opening number, familiar to anyone living in the Internet age.