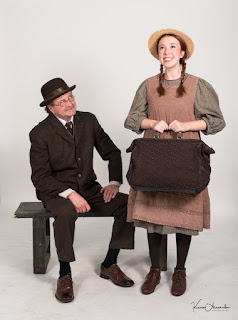 I have a confession to make. I did something on Friday that I have never done before.

My plan had been to review the Woodland Opera House production of Noel Coward’s “Blythe Spirit” and I did indeed go to the Opera House, only to be very surprised when I sat in my seat, looked at my program and realized that I was about to see “Anne of Green Gables, The Musical,” one of the Opera House’s family series. No wonder the Opera House was so full!

Confused, I looked through the program and discovered that I was a month too early for “Blythe Spirit.”

But my error was fortuitous because while I rarely review one of the family series shows, this one was delightful.

This musical tells the story of Anne Shirley, the heroine of the Lucy Maud Montgomery books and her impact on her adopted family and the town in which she lives.

Gretchen Cryer has written the book and lyrics with music by Nancy Ford. The production is directed by Eva Sarry, with musical direction by Lori Jarvey.

Katie Halls has a monumental task carrying the show as the spunky Anne, as she is in just about every scene, as well as 12 of the 15 musical numbers. She is at her best as the young orphan longing for a permanent home after several unsuccessful placements. She is upbeat and loves everything about the countryside, her new home and the prospect of having people to love her.

This poses a problem for Matthew Cuthbert (Steve Cairns) and his sister Marilla (Nancy Agee), who had asked the orphanage for a boy to help with farm chores. But Matthew is taken by Anne’s enthusiastic and endearing attitude and really hopes to convince Marilla to keep the girl.

Agee is great as the reticent Marilla, a woman who has had her share of hurts throughout her life and does not want to give her heart to anyone, especially not a young girl. Though she finally relents and allows Anne to stay, she keeps the girl at emotional arms length while slowly growing to care for her.

Emily Jo Seminoff is Diana, who becomes Anne’s BFF. Watching Seminoff grow as an actress over the years has been part of the fun of being a critic. Her range of performances from Peter Pan to Helen Keller have all been top-notch and her Diana is no exception. Watching the two girls together is such fun, especially when they accidentally get into the wrong berry cordial and end up drunk.

Barrett Shepherd is Gilbert Blythe, the young man whose ill-advised comment on Anne’s appearance causes a rift between the two which lasts for years.

Mimi Walker is Rachel Lynde, the stereotypical town busybody, suspicious of everyone and determined to think the worst of orphans and especially girl orphans.

Maris Samsel plays several roles — everything from a school girl to Diana’s mother, all with the assistance of different wigs or hats, while Spencer Alexander — who recently won a best-actor award for his Seymour Krelborn in “Little Shop of Horrors” — is Mr. Phillips, the town teacher, who firmly believes in the adage “spare the rod and spoil the child.”

“Anne of Green Gables” is no Noel Coward, but it is a fun family show.
Posted by Bev Sykes at 10:37 AM