This was a feature article: 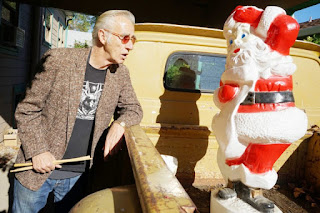 That Tom Fay is alive today is literally a Christmas miracle.

Fay was a familiar figure in the Davis music scene back in the 1980s, when his band, The Rhythm Kings, played many of the venues in town. They also played Picnic Day, and even performed for the reopening of the Varsity Theater as a concert venue.

One night in the early 1990s, Fay had a dream that eventually would save his life. He awoke at 3 a.m. with a song in his head — complete with music and lyrics — and he grabbed a pad of paper to write it down. The song was “The Santa Rhumba.”

Musician Tom Fay points out a poster advertising a benefit concert Tuesday, Dec. 12, at which he and other local musicians will perform. Courtesy photo

When funding became a problem, Fay made some phone calls and was able to get the necessary money to make the CD, which would feature “The Santa Rhumba.” There was a CD-release concert and the album raised $14,000. All proceeds went to the Sacramento AIDS Foundation.

Fay decided that holiday concerts to raise funds for charity were a good idea, and he continued to stage annual concerts for organizations such as CARES, the Sacramento’s Children’s Home and Boys and Girls clubs. The “Santa Rhumba” was always a popular part of the concerts.

In November of 2014, the 72-year-old Fay had a debilitating stroke, which left him with a feeding tube and a walker. The doctors believed he had reached his maximum possible recovery. “It was the bleakest Christmas I’d ever known,” Fay recalled.

But then, when he was watching “Good Day Sacramento” on Channel 31, announcer Mark S. Allen announced that he’d just heard this “really cool” song that was No. 12 on the Sirius Radio top 100 of alternative Christmas hits. Then he played “The Santa Rhumba.”

Fay called the TV station and confessed it was his band and his song. Allen was excited and said that if Fay could get himself into good enough shape by the following Christmas, he was invited to perform “The Santa Rhumba” on the show.

Fay took that as a challenge. He and his wife Cottie Johnson searched for alternatives to the liquid he had been receiving through his stomach tube and found an organic substance called “Liquid Hope,” which sounded promising. He began to feel better and eventually was able to remove the tube.
After months of physical therapy, he was able to throw away the walker and, in December 2015, he did indeed perform “The Santa Rhumba” on Sacramento television.

Now he has joined with Lawsuit’s Ned Sykes to produce the 2017 charitable concert. Craig Ashton of the law firm of Ashton and Price is the generous sponsor.

They have chosen the Front Street Animal Shelter as this year’s recipient of funds.

“We went back and forth. There are lots of benefits going on around the holidays,” Fay explained. “I thought animals really need help around Christmastime. The field gets a little crowded.”
He thought especially of the animals affected by the recent Northern California wildfires.

Jimi Morris of Mercy Me! Band will make a special guest appearance at 5:45 p.m. Doors will open at 5 p.m. for DJ music with Harley White Jr.

And Tom Fay will perform “The Santa Rhumba,” the song that saved his life and got him back on the stage.

From 5 to 6 p.m., representatives of the Front Street Animal Shelter will be out in front of Harlow’s with adoptable dogs and puppies, weather permitting.