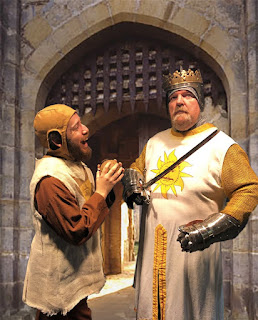 “Monty Python and the Holy Grail” was a hit movie in 1975. In 2005, a musical was adapted for the stage by Eric Idle and was a Tony Award winner. Now it is entertaining Davis Musical Theatre Company audiences.

I will confess my deep, dark secret: I’m not a Monty Python fan, though I had seen the odd bits here and there and one or two of the movies. But I had not seen “Holy Grail” nor had I memorized lots of favorite skits from the 45 television episodes. So I missed a lot of the “in jokes” in this musical.
Still, even for someone like me, this production has enough cheap shots, fart jokes and low-brow humor in it to make it an enjoyable two hours of nonsense.

The Historian (Steven O’Shea) sets the scene, giving a brief overview of medieval England with the precision of a weatherman, recounting where in the country there was plague (“a 50 percent chance of pestilence and famine coming out of the northeast at 12 miles per hour.”)

Following his announcement that this is “England,” the stage is, of course, filled with brightly costumed dancers singing about Finland and hitting each other with fish in the delightful “Finland/Fisch Schlapping Dance,” until the Historian reminds them that it is England, whereupon they leave the stage, disappointed, followed by a somber line of monks chanting in Latin.

The real story begins with the entrance of Arthur (Scott Minor), who announces his search for knights for his Round Table, with the assistance of sidekick Patsy (Tomas Eredia) and sets off on his quest, encountering ridiculous setbacks along the way, riding nonexistent horses and using coconuts to make the noise of the clopping hoofbeats.

Minor and Eredia make a wonderful pair, with Minor ineptly regal while Eredia is irresistible with his facial asides to the audience.

The duo encounter Lancelot (Quintin Casl) and Sir Robin (Andy Hyun), who is collecting bodies of the dead. They encounter the sickly Fred (O’Shea) and attempt to add him to the heap of bodies. When he insists he’s “Not Dead Yet,” they help him die to get rid of him so the two men can join Arthur’s knights.

Marci Maxey is a lovely Lady of the Lake, who gave Arthur his sword Excalibur, and just gets more beautiful as the show moves forward.

Python fans will be happy to note that the show includes a lot of familiar Python gags, like the Knights of Ni (led by O’Shea — his third role in this show!), and the killer rabbit.

A show highlight is “You Won’t Succeed on Broadway,” sung by Arthur, Patsy and Robin, explaining that you need Jews for a successful Broadway musical, following which there is a wild production number filled with “Fiddler on the Roof” parodies, including a bottle dance with Grails instead of bottles.

All ends with a community sing of “Always Look on the Bright Side of Life,” and chuckles continue as the audience shuffles out into the parking lot.
Posted by Bev Sykes at 11:58 AM