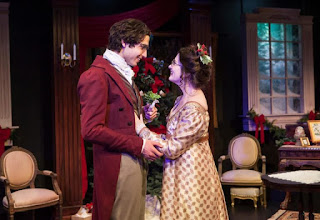 In December of 2017, Capital Stage introduced Sacramento audiences to a new Christmas play, “Miss Bennet: Christmas at Pemberley.” It was an instant hit and audience favorite to be repeated in 2018.


Written by Lauren Gunderson (“the most produced living playwright in America”) and Margo Melcon, and was written on a six-hour drive from San Francisco to Ashland, Ore., in 2016. The play echoes the format of Jane Austen, recalling what happens after “they lived happily ever after.”
The play is once again directed by Peter Mohrmann.

It is Christmas and the scene is the beautiful living room of sister Lizzie (Brittni Barger) and her husband, the hunky Mr. Darcy (J.R. Yancher). (It is worth noting that six of the eight characters are returning, after their performance in last year’s production).

The set is by Eric Broadwater, and one of the more opulent you will find on a Sacramento stage
The room is dominated by a real Christmas tree, the practice of bringing real trees into the house at Christmas being a new concept in England, though it was started in Germany. The tree becomes almost a major character in the show since it is decorated throughout the evening and everyone has comments to make about it.

Sister Mary (Elyse Sharp) is first to arrive for this family Christmas. She’s the “bookish” one who prefers to live alone, read books and play the piano (kudos to Ed Lee for his sound design which makes it difficult to determine if Sharp is actually playing the piano or not!).

She’s not much interested in the frivolous conversation of sisters Lizzie, the very-pregnant Jane (Jennifer Martin) and Lydia (Allie Coupe). (Sister Kitty is on holiday in London.)

Jane’s husband is Kevin Gish, whom Davis people may remember from his very funny role in “Gutenberg! the Musical!” His militant enthusiasm for everything, including his impending fatherhood, is infectious and makes him an audience favorite.

Mary’s life is shaken up by the arrival of Arthur DeBourgh (Aaron Kitchin), also a bookish loner who seems embarrassed to have just become fabulously wealthy on inheriting his aunt’s estate.

Sparks don’t exactly fly between these two introverts, given their reticent natures, but they are both reading the same book on metaphysics, so there is an instant attraction. Things are starting to get interesting when Arthur’s cousin Anne (Andrea J. Love) arrives to announce she is his fiancée.

“Miss Bennet: Christmas at Pemberley” is a wonderful addition to the usual list of Christmas-themed theatrical productions and, performed so beautifully by Capital Stage, it’s a must-see for all those looking to get a little holly in their hearts before the actual day itself.