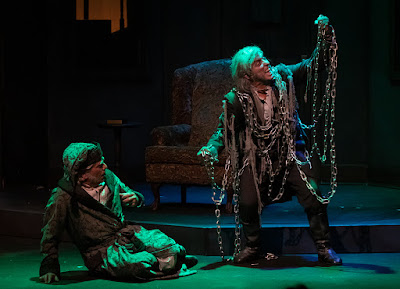 As important as Bing Crosby Christmas carols are to my enjoyment of the holiday season is the Sacramento Theatre Company’s production of “A Christmas Carol,” particularly with Matt K. Miller, playing the role of Scrooge this year for the eighth time.

This musical was commissioned by STC 32 years ago, written by Richard Hellesen with music by David de Berry, and has been an audience favorite ever since. This year’s production is directed by Michael Laun and Miranda D. Lawson (who also plays Mrs. Cratchit and Mrs. Fezziwig).
There are 35 named characters in the show and 39 actors, many of whom do more than one role and alternate with other actors throughout the run of the show.

The success of any production of “A Christmas Carol” is Ebenezer Scrooge himself, the miserly grump who finds holidays a “humbug” and just an excuse to steal money from employers by employees who take the day off to celebrate with their families, yet still expect a salary.

I have reviewed four of Miller’s eight performances. He just gets better and better. He has perfected the moments when the curmudgeon has a positive thought because of something he is shown. His absolute childish glee at the end, realizing that he has not missed Christmas after all is infectious, and his affection for Tiny Tim (Leo Bettinger, sharing the role with Kit Bettinger and David Ngirmidol) brings tears to the eyes.

In several reviews from previous years, I have complained about the reverberation used for the ghosts and I will complain again this year. Jacob Marley (Eric Wheeler) and the ghost of Christmas Past (Olivia Stevenson) were so reverberated as to make most of their dialog unintelligible, particularly bad for Wheeler, who gave an over the top dramatic performance that was lost due to reverb distortion. There was only minor reverb for the Ghost of Christmas Present (the effusive Ryan Blanning), and it was lovely to be able to hear him so clearly.

Blanning also plays an enthusiastic Fezziwig, Scrooge’s first employer, who makes working so enjoyable by the way he treats his employees. It makes the Scrooge of today have passing thoughts of how he treats his own clerk, Bob Cratchit (Mike DiSalvo).

Lexie Allison is a warm and loving Fan (Scrooge’s sister). She shares the role with Isabella Hernandez. The role of Ebenezer the child is shared by Lorenzo Lopez and Miller Traum. Sadly, I missed which actor played it on opening night, but he was quite good.

Griffith Munn plays Scrooge as a young man, in love with Belle (Maddy Grace Wood, who alternates with Elysia Martinez).

Devin Weiser is a street singer, who fills in many “change the scenery” spots. What a beautiful, clear voice she has. Lucy Lederer and Cara McIntyre share the role of the beggar child whom Scrooge attacks in his curmudgeon days.

The set by Renee Degarmo and Jarrod Bodensteiner is a wonder, with large pieces that roll or rotate while actors walk them telling the Dickens story, morphing into the characters singing the songs about the story. The smoothness of the transitions is due in large part to the lighting design of Jordan Burkholder, who directs the audience to one side of the stage while the technicians are quietly changing the scenery on the other side.

Costumes by Jessica Minnihan are lush, especially in party scenes, though I did wonder why so many of the guests at Fezziwig’s party were wearing glasses when there did not seem to be any other scene where glasses were so prevalent.

Charles Dickens described the holidays as “a good time: a kind, forgiving, charitable, pleasant time: the only time I know of in the long calendar of the year when men and women seem by one consent to open their shut-up hearts freely, and to think of other people below them as if they really were fellow passengers to the grave, and not another race of creatures bound on other journeys.”

As we move forward through this holiday season may we, like Scrooge, take those words to heart and be a little more kind, a little more forgiving, and a little more loving toward those around us.

Sacramento Theater Company’s “A Christmas Carol” is a 32-year-old Sacramento tradition and should be on everyone’s list of things to do to enhance their holiday spirit.