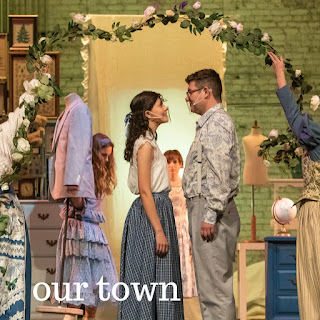 Grover’s Corners, New Hampshire is the setting for Thornton Wilder’s classic play, “Our Town,” presented by the Woodland Opera House, under the direction of Anna Miles.  Miles has a strong cast of fine actors.

As Wilder has written his play, none of the characters is particularly exciting, though it is the story of Emily (Grace Leekley) and George (Jasson Blanco), who meet in Act 1, marry in Act 2 and deal with the sadness of death in Act 3.

The Stage Manager, Ania Mieszkowska is the “star” who doesn’t act like one, but who keeps the story clear to the audience, explaining how the set pieces that are moved on throughout the story, and the interactions among the actors.

The first act concerns itself with the everyday stuff of life — getting the kids off to school for mom, getting to work on time for dad, spats between brother and sister, the milkman making his rounds, etc. . George and Emily  are young adults, living next door to each other, best friends, going to school together, and sharing secrets, dreams, and homework tips, leaning out their respective bedroom windows.

George’s mother is Emily Delk, while Emily’s is Hannah Adamy.  They spend a lot of time doing kitchen duty--preparing meals, stringing beans for supper, and making a home for their husbands and children, including George’s sister Rebecca (Frances Thayer) and Emily’s brother Wally (Theo Thayer).

"Both of those ladies cooked three meals a day - one of 'em for twenty years and the other for forty - and no summer vacation. They brought up two children apiece, washed, cleaned the house ... and never a nervous breakdown. It's like what one of those Middle West poets said: You've got to love life to have life, and you've got to have life to love life... It's what they call a vicious circle,” says the Stage Manager.

The fathers, newspaper editor Mr. Webb (Victor Libet) and Doctor Gibbs (Steve Mackay) talk about the goings on in the town. We meet other citizens of Grover’s Corners--Howie, the Milkman (Sonny Alforque, who plays several roles, including Constable Warren) and Joe Crowell, the newsboy (Jupiter Fischer).

Mr. Webb’s in depth conversation with George, before the Act 2 wedding, is particularly strong.

Act three takes place in the town cemetery. Emily has died in childbirth and is buried on a rainy, dreary day. There she is reunited with those friends and neighbors who have died before her, and who help her adjust to her new existence. Though Emily is granted one day to return to her old life, we watch her accept death as a natural extension of life and begin to disengage from life, as she finds peace in death.

This is a polished, professional production. In the end, its simple message teaches us the true value of life. As the Stage Manager says, "Whenever you come near the human race, there's layers and layers of nonsense .... We all know that something is eternal. And it ain't houses and it ain't names ... that something has to do with human beings."

Our Town is a play that shares the idea that we live life without really appreciating what it has to offer. Once we die, and are able to see what we had, it is really too late.

I can still hear Paul's voice saying the Stage Manager's lines, from the 1987 Acme show the summer of his senior year.