And the Dream Goes On 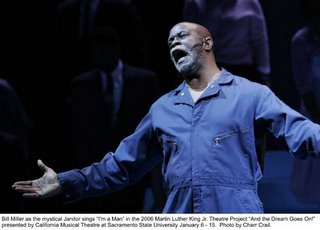 Every January, the California Musical Theater presents the Martin Luther King, Jr. Theater Project, free to the public. The production is produced in association with the California State University Sacramento’s Department of Theater and Dance and Celebration Arts.

This year’s production, “And the Dream Goes On,” is the culmination of work, which began with the 2002 “Keeping the Dream Alive.” The creative team of Anthony D’Juan and Lisa Tarrer-Lacy (book), and the Rev. Charles Cooper (music and lyrics) found their efforts fueled by passion, and a firm belief that they were obligated to pass on the legacy of Dr. King and the Civil Rights Movement to today’s youth.

They found inspiration in a quote by author Alice Walker: “To acknowledge our ancestors is to acknowledge that history did not begin with us.” Tarrer-Lacy explains, “In light of the 2005 passing of such great African American heroes and artists as Rosa Parks, John H. Johnson, Ossie Davis and August Wilson, I believe it is even more urgent for us to reach beyond today, remember the lessons learned, and make every effort to create a brighter, peace-filled tomorrow. For it is in remembering that we breathe life into the stillness of our ancestors and once more give voice to their struggles, dreams and achievements.”

“And the Dream Goes On” is at once a musical revue, a political statement, and a good ol’ revival meeting, with a heavy dose of history thrown in to hold it all together.

The central characters are a trio of men, each representing a different generation and different perspective. The Dream Guide (Derrick A. Miller reprising the spectacular job he did last year), is given the mission to pass on the legacy of Dr. King to Chuck Temper (Stephen Lamar, in his first production with CMT), an angry young man whose life centers around his “homies” (Robert Joseph Andrews and Thomas Wright). Chuck seems to feel the world owes him a living and he is drifting through life without any real direction. Both Chuck and The Dream Guide battle internally as they try to discover and fulfill their intertwined destinies. The Janitor (the incomparable Bill Miller) becomes the voice of wisdom who helps The Dream Guide and Chuck Temper find a way to connect

Outstanding moments take place in the “Museum of Living History,” where heroes of the Civil Rights Movement, sung and unsung, speak their piece. In the very moving finale to Act 1, Kenna Wright, a vision of innocence in white, with large, luminous eyes, clutching a teddy bear, sings “God Knows What’s Best for Me,” speculating on the possibilities ahead of her, minutes before she becomes victim of the 1963 bombing of Sixteenth Street Baptist Church in Birmingham, Alabama.

At the start of Act 2, Elaine Lenae Douglas, with dancers Venetia James, Misty Kline, and Sharen Moseby, portrays an elderly woman who participated in the bus boycott in Mississippi.

Bill Miller and dancer Pepper Von give voice and vision to the pride in being an African American Man, in the show-stopping “I Am A Man.”

Mary Cobb, who many years ago graced the Davis stages for the Davis Comic Opera Company and the Davis Players, appears as Grace Lorch, telling the story (“On that Fateful Day”) of a white woman who stood up to an angry mob in Little Rock to protect Elizabeth Eckford (Shelandra Gross) who was attempting to enter the all-white school. Gross then sings the emotional “I’m Determined to Change,” expressing hope for her own future and for the future of African American children to come.

Quintina Kinsey gives rousing voice to “The Legacy,” as Chuck comes to realize that he a responsibility to those who went before him, and finds pride in the accomplishments of his forefathers and mothers.

Tarrer-Lacy feels that this works is more than just a play. “I see it as a vehicle for reflection, a call to remember how far we have come, and a reminder that our work isn’t complete. It is an acknowledgment that we are not the first to struggle against injustice and that we can stand proud knowing that we, too, possess the strength to overcome diversity.”