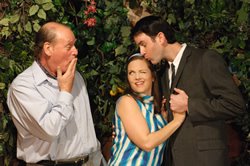 When you find you are still giggling about aspects of a show you’ve seen in Sacramento as you drive into your carport in Davis, you know that this was a fun show.

Davis’ Peter Mohrmann has directed “Relatively Speaking,” one of prolific British playwright Alan Ayckbourn’s earlier works for Capital Stage, on the Delta King, and he had ‘em rolling in the aisles throughout most of this face-paced two-act farce.

Ayckbourn explains that he wrote this play originally in 1965 following a request for a play “which would make people laugh when their seaside summer holidays were spoiled by the rain and they came into the theater to get dry.” As this play became Ayckbourn’s first really big hit, and remains popular small theater fodder today, he obviously was wildly successful in accomplishing this task.

There is little of substance here, but anyone who appreciates the fast pace and wry delivery of British humor will eat it up.

As the play opens, Gregory (the impossibly tall Gillen Morrison, who has one of the most expressive faces I’ve ever seen) is waking up in the apartment of Ginny (the delightful Heather Brooks), with whom he has been in a relationship for the past month. This is a first for Gregory, and definitely not a first for Heather.

Gregory is too smitten to care about the obvious signs that Heather has a few secrets and begs her to marry him. He seems unconcerned about the bouquets of flowers, the chocolates hiding in the bureau, the mysterious phone calls, and the men’s slippers he finds under her bed.

Ginny won’t give him an answer to his proposal, and he takes her at her word when she declares she must be off on a quick trip to visit her parents, but can’t invite him along because it would upset her mother if she brought someone home unexpectedly.

In reality Ginny is off to the home of her employer/lover Phillip (a blustery, red-faced Loren Taylor) and his wife Sheila (the delightfully clueless Gail Dartez, whose performances was very much reminiscent of a British Gracie Allen). There is some business about some love letters that Ginny needs to straighten out with Philip, but of course before that can happen, madness and mayhem ensue.

Ginny misses her train and Gregory, who is determined to meet her parents and convince both Ginny and her parents that he is perfect husband material has decided to surprise her by accompanying her “home.” Gregory arrives at the house first, to the surprise of Phillip and Sheila, who can’t quite figure out who he is. The dialog is filled with the typical misunderstanding, miscommunication, and double entendre that lead to all sorts of revolving ideas of who is what and to whom.

There is the usual farcical use of entrances and exits to keep the misunderstandings intact, which become more complicated when Ginny herself shows up, astonished to find that Sheila is expecting her and is encouraging her to marry “him” (which Ginny, of course, takes to mean that Sheila knows of and approves her relationship with Phillip).

The end is predictable and at the same time surprising.

Mohrmann has deftly directed an engaging farce, with a pace that never stops, and a humor that keeps audiences laughing throughout.

Set design is by Jonthan Williams, whose rather plain (if messy) apartment for Ginny converts before our very eyes (thanks to David Ott and Tasha Strickland) into a lovely British garden, the pride of gardener Phillip.

Lighting design is by Jordan Burkholder. One might quibble with the fact that Gregory and Ginny keep running into a darkened kitchen in the first scene to make tea, but it’s a very small point.

Costume designer Nancy Pipkin has nicely recreated the feel of the 1960s with Ginny’s mini skirted dress, her thigh-hugging boots, and the pin-on beehive hair piece.

I have long been an unabashed Ayckbourn fan and it is delightful to see his work on the local stage, and handled so adroitly by Mohrmann and his talented cast. In its first appearance on the British stage, “Relatively Speaking” was deemed “deliciously heady,” “a near miracle,” and provoking “the proverbial gales of laughter.” It’s nice to see that 40 years have not dimmed its appeal.
Posted by Bev Sykes at 6:48 AM

Anonymous said...
This comment has been removed by a blog administrator.
9:20 PM