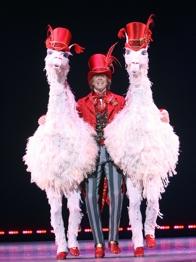 Besides being a multi talented choreographer, director and actor who has, over his career won some 9 Tony awards, Tommy Tune, now appearing as Dr. Dolittle in the musical of the same name (a show which he is credited with staging) at the Sacramento Community Center, has the longest legs in show biz. Whether he is towering over the chorus, or draping his legs over the arm of his plush chair as he decides to learn how to “talk with the animals,” you are always aware of those long, long legs (accentuated by the costumer’s [Dona Granata] choice of bold stripes for the actor’s pants.)

“Dr. Dolittle” was originally scheduled for earlier in the season, but had production problems to work out, and so was brought in to close out the Broadway Series for this year. It’s a 90 minute bit of fluff, performed without intermission (so be sure to make a pit stop on the way into the theater), based on the Oscar award winning movie of the same name, starring Rex Harrison in the title role, and based on Hugh Lofting’s “The Voyages of Dr. Doolittle,” a six book set, the first of which was written in 1920.

It is obvious that this show is based on a series of short stories, as there is no real “flow” from beginning to end, with individual scenes that could easily stand alone, and only the flimsiest of plots. It is designed to appeal to children, and children will love the colors, the animals, and the action, but may get bored in the more serious moments – Dolittle’s song of farewell to Sophie the Seal, for example, and his brief almost-romantic scenes with Lady Fairfax (Dee Hoty). Adults may feel that it drags in spots, but will find enough charm to keep the interest alive through to the end--and Tune’s overly long curtain speech about how much he loves Sacramento and how he will be happy to autograph his $20 lithographs on sale in the outer lobby.

Some songs may be familiar – the aforementioned “Talk with the animals,” and “Fabulous Places” (which those who don’t recognize the title will recognize as soon as it begins), others are forgettable and slow the pace, but then along comes “Monkey-Monkey Island Dance,” with enough tap dancing to satisfy any devotee and the show is right back on track again.

The story follows John Dolittle, a physician who realizes that he is not very good with people, but wonderful with animals, so decides to become a veterinarian instead. His “stable” of patients is delightful. Jip, the shaggy dog (operated by Allan Mangaser and Jessica Wu), Polynesia the operatic macaw (Sandi DeGeorge), Toggle, the extremely sway-back, nearsighted horse (David F.M. Vaughn and Erin Webley), and my personal favorite Gub-Gub, the overweight pig (Matthew Crowle). Each of these animals is a puppet of sorts, while Chee-Chee, the monkey is played by costumed 12 year old Aaron Burr, whom Tune described as “America’s best tap dancer” when he discovered him on “Good Morning, America.”

As the show progresses, more animals are added to the mix. Sophie (Elisa Van Duyne and Steven Wenslawski) is a lovesick sea lion, who longs to return to her fiancé, Ernie (Joe Jackson).

And of course there is the famous Pushmi/Pullyu, the coming-or-going llama (Scott Leindecker and Jonathan Richard Sandler) who becomes a circus star under the Ringmaster, Blossom (Joel Blum), who gives an energetic and outstanding performance.

Rounding out the menagerie are the fantastical giant snail, Jean-Pierre (Jonathan Richard Sandler), who speaks only “ancient escargot” and the Giant Lunar Moth (Elisa Van Duyne), who flies Dolittle from Monkey Island back to his town of Puddleby-on-the-Marsh.

There are some nice special effects in the show, such as a perilous shipwreck and, more subtle, a lovely waterfall on Monkey Island (scenery designed by Kenneth Foy).

Adults who have seen Tune throughout his long career may have wished for a bit more dancing (he does most of “Talk to the Animals” sitting in a chair, for example), but he has been dancing across the stage for more than forty years now and seems thrilled to be passing the torch on to young Burr. Their tap-dancing duet in the “Monkey-Monkey Island Dance” was delightful.

Musical Direction is by Michael Biagi, who wears several different hats (literally) throughout the performance.

“Dr. Dolittle” isn’t the best show you’re going to see all year, but it is charming, entertaining, and with all that is going on visually and musically, there is something for just about everyone to like.
Posted by Bev Sykes at 3:38 PM