Have Camera, Will Vlog

The following is the article I submitted to The Davis Enterprise for a Spotlight piece. It was edited slightly, for clarity, but is basically the way I originally wrote it... 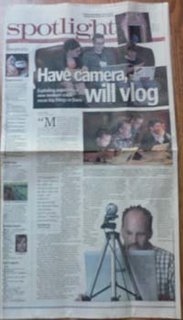 "Missbhavens" (who prefers to be known by her internet name) is a labor and delivery nurse who is trying to clean up the home she owns in New Orleans, which was flooded during Katrina. She makes videos where she talks about the bugs which have taken up residence in her home since the hurricane and her feelings of frustration about her job.

Linda McClure, from Palm Springs is retired. She loves golf and her dog Pumpkin and she likes to take videos featuring both.

Ravi Jain, with help from his wife Sonia, conducts interviews with interesting people in his car, as he drives to and from work in the Boston area and posts the interviews to his web site.

In January of 2005, Steve Garfield and his wife Carol started their own "Steve and Carol Show," a "dramady" that ran weekly for a year. Steve has also become a reporter for the popular "Rocketboom," an internet news program, hosted by Amanda Congdon, which provides a daily report on things that are happening in the "vlogosphere."

Not wanting to be left out, I take videos of my SPCA foster puppies, and have a wealth of old home movies my kids made 20 years ago that are getting new life by being posted on the net.

What do we all have in common?

We are all pioneers in the exploding new field of "vlogging."

"Vlogging" is the compressed form of the phrase "video blogging," yet another Lewis Carrollean portmanteau word that typifies Internet jargon. Similarly, a "blog" -- blended from "Web log" -- is like a daily diary that is posted on the Interneet for anybody with a computer and online access to read; a video blog is a norma blog, with video added.

San Francisco’s Schlomo Rabinowitz, one of the organizers of Vloggercon 06, the second annual international vlogging convention, held in San Francisco last week, pointed out that a year and a half ago, there were approximately 100 vloggers on the net--and nobody had heard the term “vlog” before.

Part of the explosion came about because of the creation of sites like Blip.TV or YouTube, video sharing sites which offer free video publishing services to people who have no other way of putting video onto the Internet, and FreeVlog, the brainchild of Michael Verdi and Ryanne Hodson (authors of the newly released “Secrets of Videoblogging”), which gives simple, detailed step-by-step instructions for total neophytes to learn how to create and post their videos.

Vloggercon 06 was attended by nearly 500 people, who came from all over the world. Paul Knight, from Nottingham in England, who was making his first visit to the United States, came only for the weekend, simply to meet his vlogger friends.

Videoblogging is for everyone, of any age. Rainlin, a 7 year old using her mother’s camera, has started her own video blog. Caleb Shickles, a 94 year old retired minister and self-described "Baptist Buddhist," posts weekly videos to his "Hug Nation."

"I’m a creator and an artist," says New York artist, Jan McLaughlin. " To me video blogging is anything I want it to be."

"It’s making something of beauty and sharing it with the world," added Knight.

The two day event reflected a sense of trying to decide where we are and where we are going as a fledgling community. The sessions spanned the level of technology from the very basic to the very technical and showed that while you can get as technical as you want, you really don’t need more than a simple camera that can take videos, a computer, internet access, and a little bit of simple instruction to join the fun.

"A lot of us say that it’s cheap and it’s easy to get into," said Carl Weaver, a teacher from Worcester, Mass. "It is, but only if you’ve already sunk the money into a computer and a camera.

"It’s accessible in the sense that it’s not hard to do. It allows most people to do this relatively easily, and relatively cheaply. It’s still not cheap, but it’s cheaper than it’s ever been before. And it’s getting cheaper.

Kari Peterson, who recently left her long-held position with Davis Community Television and is now working on digital media projects with other community media organizations, including Davis Community Network, was one of the presenters in a panel on public access television. I caught up with her on Sunday morning before her session. She was so excited she was ready to burst.

The day before, she had attended a session on community vlogging and she saw this as an ideal way for Davis residents to come together in a community internet collaboration.

"Public access TV has long been a vehicle for self-expression and self-representation in a medium that is otherwise controlled by commercial and corporate forces," she explained. "Video blogging offers the same thing, but is not encumbered by many of the factors that make television an unlikely medium for the average person.”

She questions how best to use this new medium to make a difference in people’s communities.

"It might be used to bring people of like minds together around certain issues,” she said. “Yesterday I sat in meetings about vlogging for political purposes. That resonated with me because we do a lot of that in community media, using the medium to mobilize and educate people, organize them around social issues."

Here's an example: Peace Corps worker Melody Jenkins, in collaboration with world traveler Jon Rawlinson, for example, started a community vlog which brings the world news of Nata, Botswana (described as “nothing more than a dust hole”), where the population is 5,000 and 37% are infected with the AIDS virus.

Through frequent videos, they are making the world aware of the fight in this one tiny corner of Africa.

Peterson also recognizes that video blogging can be so much more.

For Erin Nealey, a stay at home mom from South Carolina, video blogging started out as being a way to communicate with close friends and family, and to let the grandparents watch the kids grow. Later, as she began to make friends with other vloggers, it became a way to connect with people and share ideas.

Josh Leo a 22 year old from Grand Rapids, Michigan echoes that sentiment. "It’s sharing your life and forming relationships by doing that."

Susan Kitchens is using video blogging to create an oral history project and to help people gather their own family histories.

"Digital storytelling, oral history projects and videoblogging have a lot to offer each other," she explains. "At their best, the best video blogs are about personal storytelling. New advances in capturing oral histories add another dimension to the story."

Richard Hall, from the Missouri Ozarks, looks at it more technically, and in a manner likely to make a casual listener's eyes glaze.

"A traditional thing with video blogs is that they have syndication so that you can use an RSS reader so you can use RSS with enclosures. To me it’s kind of a technical bit to define it technically."

That sort of response may turn off people who have no idea what "video syndication" is, or what an RSS feed is, but the variety of responses I got to my question about what constitutes a video blog shows how there is something for everyone, and that even those involved in doing it aren’t exactly sure how to define it.

The ideas are limitless.

"It is like the wild west," said Rabinowitz, describing his vision of this pioneering art form. "All of us are just trying to figure out where you make the streets and where you set up a house and that sort of thing. We want to do that now, which is very important, before some professional corporation walks in and buys the block.

"Now is our time. If we did this in a year from now or two years from now we would be walking into this strip mall that we didn’t help create. We might as well create our own town here."

Kari Peterson’s immediate dream is to get together with people of all ages in the Davis Community who are either vlogging or interested in learning more about vlogging. She sees Davis as creating our own subdivision of this wild west town Rabinowitz describes. With its long tradition of oral history, with political activism, and with its openness to new things, she feels that Davis is perhaps the perfect community to design and implement a community video blog, learning as we go along exactly how that can benefit the community at large. 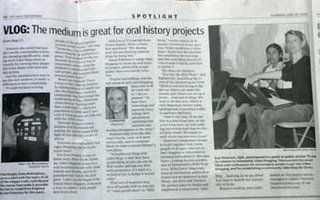 Well done, Bev. And thanks for the nod :)

Soooo sorry about your sweet puppy.

You know I love you to bits for telling people about me and quoting me, also. It's Fab!! Kisses. Any chance of a copy, I'll pay postage. E-mail me and I'll e-mail you back my address.

Sorry to hear about the Puppy, such a shame. Mind you it's not the first time your videos have made me all emotional. Our newest cat got Neutered the other day, she's more quiet now.

Thanks Bev, send us a copy.

Shame about the puppy.

Good overview of the diversity of voices/content out there (and well written to boot!)

Bev, this is awesome!! Thanks so much for including me in the article. I would love a copy (if you can still get one). Email me to let me know how much postage is, and I'll send you paypal or something. Very well written!

Very, very excellent! I wish I could write something as awesome as this. By the way--Rainlin uses her own cheap little camera, not mine--can you believe it? :)

Great article you wrote. Actually, everything you write is excellent. Thanks for including me in it, I feel like a celebrity.