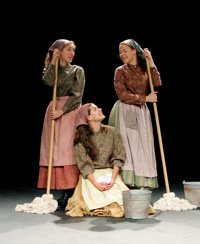 There are a lot of flashy ways to open a musical show. Some use glitz to capture the audience’s attention from the start. One of the most famous stage and film musicals, “Fiddler on the Roof,” Music Circus’ opening production, opens, with a brief introduction by the milkman, Tevye (Ron Orbach) followed by a simple circle dance. “Tradition,” is the simple number in which all Jewish members of the small pre-revolution Russian village of Anatevka join hands and dance around the stage as each group describes its role in the life of the village (Papa earns the money, leads the prayers, and has the final say in family matters; Mama runs the house and tries to make life peaceful for Papa; the son studies and waits for the family to find a bride for him; the daughter learns the ways of running a house and also waits for the family to choose her spouse).

I have seen the circle dance dozens of times and I would be hard pressed to explain why I found this Music Circus staging so special, but it just stuck out for me. It foreshadowed the high energy production to follow.

“Fiddler on the Roof,” based on the 1949 stories of Sholem Aleichem, the 1965 Tony award winner for best musical, with music by Jerry Bock, lyrics by Sheldon Harnick, and libretto by Joseph Stein, is a study in contrasts. There is the fun of Tevye’s personal conversations with God, the innocence of his daughters imagining their future husbands, the antics of the town matchmaker, the tenderness of first love and discovered old love, all contrasted with the bleakness of life in the village, the antagonism between the Jewish community and their Russian overlords. This isn’t a lighthearted comedy, but neither is it a story that is filled with nothing but sadness.

Ron Orbach’s Teveye is a bit more bombastic than I am accustomed to, but he handles the role well.

His wife Golde is played by Valerie Perri, who is quite surprised to discover, after 25 years of marriage that yes, she probably DOES love her husband. (“Do You Love Me?”)

Shannon Warne gives a strong performance as the oldest daughter, Tzeitel, the first in her family to break with tradition by marrying the man she loves (Motel the Tailor – Richard Israel) rather than, Lazar Wolf, the Butcher (Barry Pearl), chosen for her by Yente the matchmaker (an outstanding performance by Helen Geller). Warne and Israel are beautiful together and Motel’s “Miracle of Miracles” is a real ode to joy. Teveye’s love for his daughter is palpable as he gives in to her when she cries that if she marries Lazar Wolf she will be unhappy all of her life.

Tzeitel’s sisters give equally strong performances, Bets Malone as Hodel, who gives her heart to Perchik, the student (Shannon Stoeke) who moves into Tevye’s home to give lessons to his two youngest daughters, Shprintze (Francesca Arostegui) and Bielke ( Harper Junior High student Camille Totah, who will be familiar to Davis audiences); and Julianne Katz as Chava, her father’s favorite, who enrages him by giving her heart to the Russian soldier, Fyedka.

Director Glenn Casale has created a production, with many memorable visual moments. The Sabbath scene is particularly lovely, with Tevye and his family at a table on stage, singing the Sabbath prayers, while the stage rotates, and other members of the town joining in from all around the aisles of the theater.

Michael Schweikardt is credited with scenic design and his on-stage work is good (particularly the roof on which the fiddler (Ivory McKay) plays in the opening scene. Homes in the village are suggested by roofs hung from the rigging above the stage, but they are hung much too high to even be noticed, unless one is looking for them. Greenery, which is supposed to suggest outdoor scenes, is almost invisible and seems hardly worth the trouble to hang.

Choreographer Bob Richard gives us some delightful moments. The dance of the daughters as they sing "Matchmaker, Matchmaker" is fun, and the bottle dance at the wedding of Motel and Tzeitel is always a crowd pleaser. The dream sequence where Tevye convinces Golde that he has seen her grandmother, who disapproves of Tzitel’s marriage to Lazar wolf is great fun.

After a shocking end to Act 1, Act 2 is the darker act, when the reality of the condition of the people of Anatevka comes to light and the happy community is broken up.

This is not a "happily ever after" show, but it demonstrates the resilience of the human spirit and at its core is a salute "to life!"
Posted by Bev Sykes at 12:13 PM