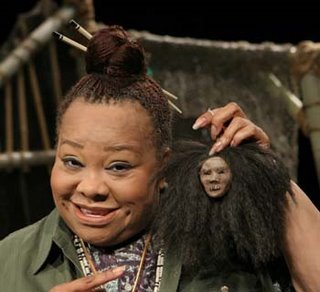 “Some Enchanted Evening,” “Bloody Mary,” “There is Nothing Like a Dame,” “Bali Hai,” “Younger than Springtime.” The list reads like a section from Broadway’s All-Time Greatest Hits, and that’s only Act 1.

Rodgers and Hammerstein’s 1950 Tony-Award winning musical (based on James Michener’s Pulitzer Prize winning novel “Tales of the South Pacific”), which opened Tuesday night at Music Circus’ well-air conditioned Wells Fargo Pavilion, is an old war horse, but its popularity has not dimmed. At times the plot of this musical seems very dated. At other times, one marvels at (and is perhaps depressed by) the consistent timeliness of its message.

Amidst a backdrop of military hijinks on a Pacific island, it tells the more serious story of two couples -- Nurse Nellie Forbush in love with the French expatriate Emile de Becque, and the young Marine Lieutenant Joseph Cable in love with Liat, a Tonkinese woman -- and the racial prejudices that affect all four of them.

Leland Ball, returning for the first time since 2005's “King and I,” has directed a first-rate production, with an outstanding cast.

Kerry O’Malley is an absolute delight as Nellie. She has a sparking effervescence that explodes off the stage. Her internal struggles over her attraction to a man who is so different from herself, her joy at discovering her love for him, and her later pain upon learning about de Becque's Polynesian children (Justin Schuyler and Heidi Schuyler) are sincere and believable. She also does a great shower scene (“I”m gonna wash that man right out of my hair”) and her talent show number, “Honey Bun” was delightful.

Samuel Smith is better known for his operatic roles, so he brings the same kind of operatic basso to the character of Emile de Becque that Ezio Pinza did to the original. He gives the role power and dignity. He may be a little lacking in the “suave” department, but this is more than compensated for when he opens his mouth to sing tunes like “Some Enchanted Evening.”

Will Ray is a handsome Lt. Joe Cable with a beautiful voice for “Younger than Springtime,” who effectively displays the bitterness of a conflicted man who realizes that though he loves a woman, his upbringing won’t let him get past the color of her skin (“You’ve Got to be Carefully Taught.”)

Leanne Cabrera is Liat, the young girl, who has almost no lines and no songs, but who makes an impression just for being an endearing young girl swept away by a tall, handsome military man. Since there is a language barrier between the two, her part is mostly pantomime, yet somehow it feels bigger.

The Liat-Joe plot line feels strikingly inappropriate in this day and age, where there is such emphasis on sexual exploitation of innocent young girls. The lieutenant is taken to a remote location by the girl’s mother, where he finds a very young girl for what becomes an instant physical encounter. As the two embrace for the first time (this being a show from 1949, the manner of the encounter is only hinted at, when the lights go down and then come up on a shirtless Joe lying in the lap of a happy-looking Liat), there is such depth to the emotion that it does not ring true. But the plot line has been playing successfully for more than 50 years, so the audience must not mind.

Armelia McQueen is superb “Bloody Mary,” the wise-cracking, betel-nut chewing native woman selling cheap trinkets to the military, speaking broken English and cackling in delight with the seabees, yet she gives a haunting rendition of “Bali Hai,” as she describes the mysterious island just off shore, just out of reach. Mary is a wheeler-dealer who will even prostitute her daughter in the hope of making a good marriage for the young girl.

Simply outstanding is the performance of Robert Creighton as the scheming entrepreneurial seabee Luther Billis, always looking to make a deal, desperate to find a woman. A highlight was his performance of “Honey Bun” at the camps Thanksgiving talent show.

The ensemble is excellent, particularly the seabees, a group of men who each have small solos to sing and who each seem to have principal quality voices.

“South Pacific” is a show which addresses the issue of racial prejudice head on, in a blatantly dated manner, but which evokes situations and emotions still prevalent today. In the end, it is through the children that we see hope for a more tolerant tomorrow. A tomorrow for which we are still waiting, 55 years later.
Posted by Bev Sykes at 11:06 PM