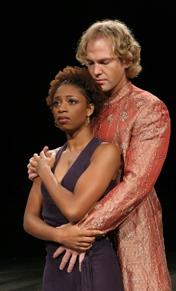 Nobody had a bigger smile on her face at the curtain call than Montego Glover. The actress, playing the title role in Elton John and Tim Rice’s “Aida,” this week’s Music Circus production, had every reason to smile. She had just turned in a mesmerizing performance as the fiery Nubian princess, captured by Egyptian soldiers, who falls in love with her captor, Army captain Radames (Michael Hunsaker).

“Aida” probably has no songs you’ve heard before, but Glover gives a stunning, emotional performance of the first act finale, “The gods love Nubia” and a song from prison, “Easy as Life.”

As her lover, Hunsaker is a strong, virile, handsome man torn between his love of Aida and his duty to his father, Zoser (Adrian Zmed), whose dream is to see his son on the throne of Egypt and who, to that end, has arranged for his son to marry the daughter of the Pharoah (Mark La Mura)

The third member of this love triangle is Radames’ fiancee, Amneris, the Egyptian equivalent of a “Jewish American princess,” a woman best known for her “beauty, her wisdom, and her accessories,” who also acts as a narrator to the story. Kelli Provart is from the Broadway and touring productions of “Aida” and is simply excellent. She brings a comic touch to the tragic tale, but is also regal as the daughter of the Pharoah, who will assume her father’s throne upon his death and bring peace to the region.

An outstanding trio "A Step Too Far," which opens the second act with the three principal characters describing how they find themselves entangled in conflicted loyalties and emotions.

Though the story will be familiar to opera goers, John and Rice have introduced a new character, Mereb, the wise-cracking Nubian slave who delivers Aida from the slave ship to the palace, and suddenly recognizes her as his princess ("How I know you"). Edward M. Barker gives Mereb a nice balance between wheeler-dealer who really kind of likes his life at the palace, and dedicated Nubian who will protect his princess and his king at all costs.

In the small role of Aida’s father, Amonasro is popular local actor, James Wheatley, who gives a somewhat over the top performance, but who makes a fantastic escape in a boat designed by Michael Schweikardt.

Choreography by Todd L. Underwood is energetic, particularly in the Nubian dance sequences.

This is not a “happily ever after” story, the lovers meeting a tragic end, of course, but as a Disney production the writers can’t let people leave the theater depressed, so they cop out and toss in a “what if...?,” “maybe...” sort of ending to give everyone hope.

With all that is going on in the middle east this week, it seemed odd to be watching this musical, where so many of the lines seem applicable to the Israel-Lebanon conflict.
Posted by Bev Sykes at 6:00 PM