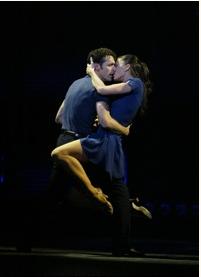 With the California Musical Theatre’s Wednesday night premiere of the 2006-2007 Broadway Series, the Sacramento Community Center played host to the 1,000th performance of the “Movin’ Out” national tour, which premiered on January 27, 2004 in Detroit.

“Movin’ Out” is really a dance show with “strong musical content,” rather than a traditional musical. But there is choreography by the legendary choreographer Twyla Tharp to 22 songs of rock and roll legend, Billy Joel, loosely woven into a flimsy plot line to give the show logical progression from A to Z. It’s a short show. Even with a back-up in the parking lot, you’ll be back in Davis by 10:30 p.m.

Joel had been asked many times for permission to translate his songs to the stage, but had always refused until the call from Tharp. Whatever Twyla wants, Twyla gets. The two legends discovered that they shared a sharp eye for presenting stories in new and unique ways. Tharp felt that Joel’s songs were filled with emotional stories and specific characters that could be the basis for a compelling story. The show opened at the Richard Rogers Theater in New York on October 24, 2002 and played 1,037 performances before closing in December of 2005.

The massive yet minimal set by Santo Loquasto puts the “piano man” at the top back of the stage, along with a 10 piece band, while the action takes place below on the stage floor. Donald Holder’s lighting design plays a major role in creating mood and putting on a spectacular lighting show.

Darren Holden, the “piano man” sings the lyrics (if you’re not a Joel fan, it might be nice to get a C.D. or two and read some of the lyrics, because the lyrics are difficult to decipher) and has such nimble fingers that in the opening number of Act 2, “Invention in C Minor,” your eyes are drawn to the piano rather than to the dance that is going on on stage.

What little plot there is deals with a group of six high school friends and follows them from their senior prom until many years later in their lives. It covers loves lost and found, as well as sex. drugs and rock ‘n’ roll. The guys go off to fight in Vietnam and one of them is killed. Those who come home have a difficult time adjusting, but ultimately it all ends happily at a high school reunion, with rekindled hope, love and friendship.

Eddie, the “bad boy,” the loner, the guy with all the problems, is danced by Brendan King, though if the audience thought he looked a bit different after he got off drugs and cleaned up a bit in Act 2, that’s because King was replaced by Lawrence Rabson for the last quarter of the show.
Eddie’s two buddies are James, danced in this performance by Sean Maurice Kelly, and Tony (David Gomez). The men (and all the dancers in the ensemble) are amazingly athletic (watch Eddie doing one-handed push-ups!) and yet do a lovely old-fashioned dance, tongue in cheek, to “Waltz #1 (Nunley’s Invention)” prior to their induction into the military and subsequent tour in Vietnam, where James is killed.

Holly Cruikshank plays Brenda, a femme fatale who is dating Eddie in high school but then finds herself drawn to Tony as the group begins to grow older and start their adult lives. Cruikshank has impossibly long legs and is at her seductive best in “Uptown Girl” and shines in her solo, “Air (Dublinesque)”

Laura Feig is Judy, the “sweet one” (the sweet ones always wear white gloves). She and James are engaged at the start of the show and her heartbreak following his death was beautifully portrayed in the first act finale.

Leave your thinking caps at home for this one, but bring some shoes that will allow you to tap your feet, because you’ll be doing that throughout. This is a visual spectacle, a choreographic triumph and just a darn fun evening for fans of either Billy Joel’s music, or great dancing.
Posted by Bev Sykes at 11:40 PM