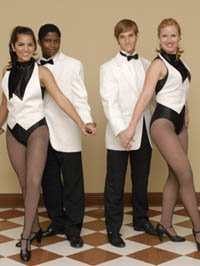 Ask any theater goer to list the top ten Broadway shows and you’ll probably get things like "Oklahoma!" "Music Man," or "Sound of Music." It is unlikely that you’ll find "Martin Guerre," or the "Tonight’s the Night," the compilation musical, based on the songs of Rod Stewart (and described by one reviewer as "...starts in Hell and sadly doesn’t get any better.")

So one questions whether "Musical Mystique," the 34th annual "Best of Broadway" musical revue, now at the Luther Burbank Theater in Sacramento through September 24, is actually the best of Broadway, but there is no denying the sincerity of the participants, or the hard work and love that goes into this production. (There are nearly 100 names in the program listed as ushers alone, and 30 listed for the concession stand.)

Best of Broadway was conceived by David L. MacDonald in 1973 as a way to raise money for a local boys’ home, and has grown to become one of the largest non-profit, volunteer community shows in Northern California. The cast consists of over 150 singers, dancers, gymnasts and musicians, ranging in age from 7 to 70, who are chosen from open auditions. Many alumni of Best of Broadway have gone on to actually perform on Broadway.

While there are a few weak spots in the current production -- an inconsistent sound system that was too loud for some and not loud enough for others, and some performers who really shouldn’t have been given solos -- the strengths in this production more than compensated for its shortcomings.

David L. MacDonald is the producer director of this revue, with musical direction by Dan Pool and adult choreography by Diana Ruslin and Terri Taylor-Solorio, with Kat Bahry heading up the choreography for the children’s ensemble, numbering some 50 children. Bahry, along with children’s choral director Enrique Ruiz did a fabulous job with the children, some of whom were obviously born to perform.

Marji DuBois, Jim Crogan and Corey Rickrode are credited with choral direction for the adult ensemble and did an excellent job.

Special mention must also be made of the sign language interpreters. Cristie Pell is the chief interpreter and I have marveled at her work, now, for several years. Her three assistants were not listed in the program. Each took one of two numbers at a time to sign, but Pell did the lion’s share and one could easily see how she made music come alive for the non-hearing members of the audience.

This high energy production is filled with 52 musical numbers from 15 different musicals, and there were definite high points. The choreography for "Step in Time" from "Mary Poppins" was a knockout.

Randy Solorio works overtime this year, with his Fonzie-esque presentation for two lengthy sections, the Act 1 salute to "All Shook Up," which features the songs of Elvis Presley, and the Act 2 songs from "Tonight’s the Night." Solorio can shake, rattle and roll with the best of them.

Marji DuBois has an outstanding voice and is featured in seven different numbers, all of which come alive because of her performance.

Josh Gonzales and Tae Kim sing the roles of Martin Guerre and Arnaud du Thil from "Martin Guerre." Both men have marvelous voices, particularly Kim, whose slender build belies the power and the depth of his voice.

Enrique Ruiz, Dewight Mitchell, Ryan Ritter and Aaron MacDonald do an excellent impression of The Four Seasons in the selections from "Jersey Boys."

The children’s chorus, which performs "Supercalifragilistic" in Act 1, returns in Act 2 looking like they ran wild in a Halloween costume shop, with the assistance of costume coordinators Cathy Carpenter and Joan Pohlman. Dressed as doctors, clowns, police officers, ballerinas, and just about any costume you can imagine, they did a very cute rendition of "Always Look on the Bright Side of Life" from Monty Python’s "Spamalot." There is one little girl in green doctor scrubs with a stethoscope around her neck who is having such a good time you can hardly take your eyes off of her.

You can’t think about Best of Broadway without thinking about numbers--numbers of songs, numbers of people, numbers of costumes, numbers of volunteer hours which go into putting on this amazing production. It’s a visual extravaganza and an incredible labor of love for those involved.

And best of all, it goes to support many worthy causes.