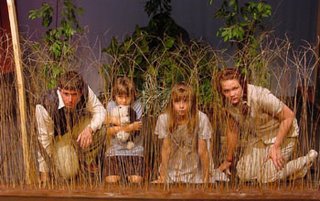 This review appeared in The Davis Enterprise on 8/29/06
“The Boxcar Children,”directed by Jeff Hammond, adapted for the stage by Barbara Field from the book by Gertrude Chandler Warner – and the first in the Woodland Opera House’s “Theater for Families” series for this season.

It’s a depression era story of four children, orphaned when their parents are killed in a boating accident. When the older twins discover that officials plan to split them up, they take matters into their own hands (“we stick together like glue”). They run away and set out to find a way to take care of themselves.

This may be the very best type of play for younger children, raised on the likes of “Sesame Street,” which plays to a child’s short attention span. The story is presented in many, many scenes (in Act 2 I counted 20 scenes; I am sure there were more in Act 1), each with a small bit of scenery (designed by Jeff Kean), whether a clump of grass or a pile of trash or a mailbox to signify a home, but all easily rolled in and out again. A “scene” may consist of only a few lines (some are, of course, longer), but there is no time for a child to become bored with the action on stage because it is constantly changing.

I was pleased to note that all the pre-show fidgiters and bouncers and chair kickers sat engrossed in the action of the play throughout both acts. I didn’t even hear any whispering in the audience.

There is a new look for the Theater for Families series this year. In order to raise the quality of the productions, the company is no longer casting shows only with children 18 and under. The casting is now age appropriate, with adult roles being played by adults.

In this production, however, there is absolutely no question about who holds the show together--it is the children themselves, especially the four title characters.

Rob Blake, as Henry, the oldest boy, is a natural for the stage. I wish that some of the otherwise excellent local actors around Yolo County could project as well as he can. Henry is the responsible one, the one who finds a job and brings in some money to help buy the necessities. Blake makes the role believable and he can be heard in the back of the Opera house, without making his projection seem forced.

Kimberely Casazza, Henry’s twin, Jessie, is the practical one, keeping the family together. She’s the idea person. Casazza has done several productions at the Opera House in the past two years, and her experience shows.

Erin Solomon is absolutely perfect as Violet, the “refined” child. When Henry has money, Violet asks him to buy toothpaste and soap and a tablecloth. She worries about her clothing getting dirty. She is the one who finds “nice” things at the dump to dress up their new “home” and asks if there is enough money to buy seeds because “Mommy always planted flowers.”

Though authorities feel he has special needs, there is nothing “slow” about little Benny (9 year old Drew Thomsen, making his stage drama debut -- he appeared in last year’s “Seussical, the Musical”), who learns to read under Jessie’s tutelage. You would never know from Thomsen’s professional performance that he has so little stage experience.

Charlotte Lenton is great as Myrtle, one of the homeless people the children encounter in their travels. Nicki Reiff is her friend Cookie, and also plays the Baker’s Daughter. Matt Reiff is “Kid,” who travels with Myrtle and Cookie, but who doesn’t speak.

In the adult cast, Don Solomon (Erin’s father) gives a lovely sympathetic performance as Dr. Sam Truman, who hires Henry and then begins to realize that Henry is not quite what he presents himself to be. Carin Beede is Mrs. Truman, giver of lemonade. Her concern for the children is evident.

Vanessa Zaragoza is quite good as Sarah Calder, the social worker who truly has the children’s best interests at heart and who works to bring them to the attention of “Mr. Aldin,” Gary Agid, with positive results.

Rebecca Baland is Mrs. Alberts, who finds the children to be a bother and just wants them out of her life. Alan Smuda is Officer Banning, the policeman charged with finding the runaways.

This is a lovely little family show, suitable for all ages. It continues at the Opera house through September 10. Take your children. Take your grandchildren.
Posted by Bev Sykes at 7:12 AM