A Funny Thing Happend on the Way to the Forum

This was printed in The Davis Enterprise on 8/16/06 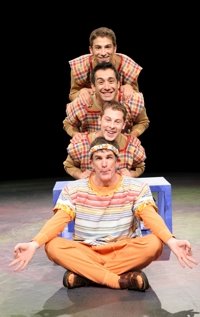 There’s only one word to describe Music Circus’ production of “A Funny Thing Happened on the Way to the Forum,” which opened Tuesday night: Zany.

This 1963 Tony award winner, with music and lyrics by Stephen Sondheim, book by Burt Shevelove and Larry Gelbart, and direction by Marcia Milgrom Dodge is based on the comedies of the ancient Roman playwright Plautus, and the humor is bawdy and fast-paced. (“If I've told you once, I've told you a hundred times; do not fan the girls when they're wet! But you'll never learn, you'll be a eunuch all your life.”)

Set in a time where everybody had slaves, eunuchs were commonplace, courtesans were for hire, and virgins were seen as objects to be conquered, the action centers around three homes, the house of citizen Senex (Walter Hudson), his domineering wife Domina (Jessica Sheridan), and their love-struck son Hero (Ryan Driscoll); the house of Lycus (Ron Wisniski), a buyer and seller of courtesans; and the house of Erronius (Jim Lane), an old man who has been roaming the world for the past twenty years, looking for his son and daughter, stolen in infancy by pirates.

This is a stellar cast, but head and shoulders above the rest is James Brennan as the slave Pseudolus, slave to Hero. Pseudolus is a man who desperately wants his freedom and is always looking for a way to get it. Brennan has a list of theatrical credits as long as your arm, boundless energy, and brilliant comic timing. He also plays well with the audience and handles unexpected situations with aplomb.

Head slave in the house of Senex is the appropriately named Hysterium, a Charles Nelson Reilly-esque portrayal by the very funny John Scherer.

When Pseudolus learns that his master, Hero, has fallen in love with the courtesan, Philia (Ashleigh Davidson, daughter of John Davidson), he sees a way to win his freedom by getting the girl for him. ( “People do not go around freeing slaves every day.” “Be the first. Start a fashion.”)

There’s just one little problem with the plan. Philia, a virgin newly arrived from Crete, has been promised to the warrior Miles Gloriosus (Christopher Carl, last seen as Carl-Magnus in the recent production of “A Little Night Music”), whose name reflects his inflated opinion of himself.

Madness and mayhem ensue, including the plague, leprosy, a magic potion, a soothsayer, body snatching, a bride who is not as dead as everybody thinks she is, “and a happy ending, of course” as the opening number, “Comedy Tonight” promises.

The show could not keep up the rapid pace that it does without “the Proteans,” Venny Carranza, Brant Michaels, and Peyton Royal, who play dozens of roles, from the giggling eunuchs of the house of Senex to the warriors who accompany Miles Gloriosus, and everything in between. They are leaping, tumbling, rolling, running bundles of energy and masterful physical comedy. They were brilliant and hilarious.

Marcia Milgrom Dodge understands directing for theater in the round and kept her cast moving at all times, never once favoring one part of the audience over another. She worked well with choreographer D.J. Salisbury.

“A Funny Thing Happened on the Way to the Forum” is fun, plain and simple. A funny book, fun songs, great energy, and a splendid cast. It’s the perfect divertissement for a summer evening.
Posted by Bev Sykes at 5:31 PM