This appeared in The Davis Enterprise on 8/9/06 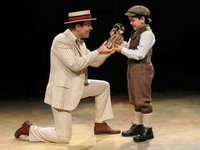 Leland Ball started in theater 46 years ago. He joined the Music Circus in 1976 and has been guest director, resident director, associate producer and producing director. He “retired” in 2002, but has directed one or two shows each summer for the past 2 seasons. However, he is finally hanging it up for good and next summer, his bio promises, he will return as a member of the audience only.

Ball chose to go out with the quintessential American musical, Meredith Wilson’s “The Music Man,” which opened last night at the Wells Fargo Pavilion. What better way to top off a professional theatrical career than with 76 trombones (give or take a few), high stepping dancers, a barbershop quartet and a house filled with clappers and toe
-tappers.

John Hillner gives a top notch performance as Harold Hill, the traveling salesman who finds his life changed forever by an impulse stop in a little Iowa town, where he plans to work the “boys band” scam he has been running for years.

Sarah Tattersall is excellent as Marian Paroo, the librarian who is first suspicious of the smooth-talking stranger, and then falls under his spell.

Her mother, Mrs. Paroo, is broadly played by Brooks Almy, with a brogue so thick you could cut it with a knife.

As the mayor with all the verbal eloquence of George Bush, Patrick Quinn delights. He’s bluff and bluster and determined to “get that spellbinder’s credentials” if it’s the last thing he does.

Ruth Gottschall may have done more with the role of Eulalie McKecknie Shinn, the mayor’s wife, than I have ever seen done in many, many productions of this show. She has a face as expressive as Carol Burnett’s and with her impeccable timing, she gets the biggest laugh of the show with her line “I think he means peep.”

Robert Creighton is delightful as Harold’s old scam partner, now gone straight, Marcellus Washburn. When he leads the kids of the town in the “Shipoopi,” he’s great fun to watch, but he shines dancing around the stage while Harold sings about “The Sadder but Wiser Girl.”

Nine year old Matthew Gumley has an impressive set of credentials for one so young, but he seems to have been working steadily since age 4. He is the perfect Winthrop, the shy little boy with a lisp who can’t understand why his Daddy had to die, but who also falls under the spell of Hill. Gumley is one big ball of talent and is obviously enjoying every minute of the attention on stage.

Strong performances are given by Shane Rhoades as Tommy Djilas, the kid from the wrong side of the tracks who “almost had perpetual motion once,” Manoly Farrell as Zaneta, the Mayor’s oldest daughter, who is giggily infatuated with Tommy, and Andrew Boyer as the anvil salesman, Charlie Cowell, who is determined to make sure that Hill gets his commuppance.

Add to this strong cast a chorus of singers and dancers as crisp and precise as a kick line of Rockettes and the end result is a delight.

Due to popular demand, a special Sunday matinee performance has been added on Sunday, August 13 at 2 p.m. Tickets for this production are being offered at $15 off to children, ages 4-11.
Posted by Bev Sykes at 7:01 AM