This appeared in the Davis Enterprise on 8/2/06 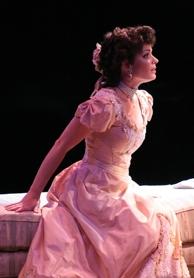 “The smile for the fools was particularly broad tonight,” says Mme Armfeldt (Barbara Rosenblat) at the conclusion of Stephen Sondheim’s “A Little Night Music,” making its Music Circus debut this week.

I don’t know if those who remained for the entire performance were fools or not, but there were certainly smiles aplenty for those experiencing this near-perfect production. I can only assume that the seats left vacant after the intermission were either because of the chilly temperatures inside the Wells Fargo Pavilion (pay no attention to the outside temperatures; bring a light wrap to avoid being chilled by the air conditioning!) or because this may, perhaps, be the most “operatic” of offerings yet presented by The Music Circus in its 56 year history, which may not suit the tastes of some faithful Music Circus patrons.

Whatever the reason, the real fools were those who did not return following intermission.

Based on Ingmar Bergman’s “Smiles of a Summer Night,” the plot of “A Little Night Music” could rival any modern day soap opera and hold its own. Fifty-ish year old attorney Fredrik Egerman (Paul Schoeffler) has married 18 year old Anne (Carolann M. Sanita), who is still a virgin, 11 months into the marriage. Anne finds herself attracted, not to her husband, but to her stepson, the religiously zealous Henrik (Jim Poulos), a young man with racing hormones and eyes for his stepmother, but hands and other body parts for Petra, the chambermaid (Melissa Dye), and guilt for any sexual feelings at all.

Meanwhile, Fredrik has never gotten over his old love, the famed actress Desirée Armfeldt (Nancy Opel), who has an out of wedlock daughter (Paige Silvester) and a jealous lover named Carl-Magnus (Christopher Carl), who ignores his own bitter wife, Charlotte (Elizabeth Ward Land), who is not only aware of his affair, but is willing to help him sort things out. All of these mismatched lovers convene for a weekend at the luxurious home of Madame Armfeldt, Desirée's crusty old mother, where romance, comedy and wonderful music ensue.

Director Stafford Arima has brought together some terrific principal performers, starting with the Liebeslieder Quintet – Quentin Darrington, Laurie Mitchell, Emily Herring, Michael Scott Harris and Allison Blackwell – who act as a kind of Greek chorus, setting the stage for the action which is to come, or augmenting the action that is taking place. The quintet opens the show, encircling the theater in a very effective, “Night Waltz,” which repeats throughout the show.

As Fredrik Egerman, the middle aged attorney trying to recapture his youth with a child bride, Paul Schoeffler is outstanding. He’s handsome, he has a magnificent voice, and his feeling for his lost love Desirée is palpable.

Carolann M. Sanita is hauntingly beautiful as the young Mrs. Egerman (Anne), who thinks she loves her husband but just isn’t quite ready for the physical aspects of marriage. (“You can’t force a flower,” Fredrik explains to Desirée in “You must meet my wife.”) Anne is struggling to find the maturity to be the wife of a prominent attorney, but prefers giggling with the maid over girl stuff instead.

Nancy Opel is a marvelous Desirée, an aging, but still charismatic actress, who has finally realized that Fredrik is her one true love. She gives a classic performance of the haunting signature song from this show, “Send in the Clowns.”

Christopher Carl is a bombastic Count Carl Magnus, totally insensitive to his wife, Charlotte (Elizabeth Ward Land), as he rants to her about his jealousy upon learning that his mistress has been seeing her former lover.

Jim Poulos is splendid as Henrik, tormented by his desire to give himself to God, yet wracked with temptations of the flesh, to which he guiltily succumbs.

As the family matriarch, a woman who has numbered kings among her lovers, Barbara Rosenblat gives a very regal performance. Madame Armfeldt alerts her granddaughter to watch for the summer night to smile. "It smiles three times," she says, "first, for the young, who know nothing; second, for the fools, who know too little; and third, for the old, who know too much."

Paige Silvester does an outstanding job of playing the child who is often more mature than her mother, who knows more of life than most children her age

Scenic Designer Michael Schweikardt created some beautiful scenes, with hanging tapestries for the drawing rooms and a magnificent forest for the outdoor scenes in Act 2.

“A Little Night Music” is a story about love and growing old without the one ‘true’ love for which everyone is searching. It’s about realizing too late that the one that got away was the one most needed.

This production by Music Circus is simply outstanding, and will leave you, along with the other fools, smiling particularly broadly at its conclusion.
Posted by Bev Sykes at 9:17 PM