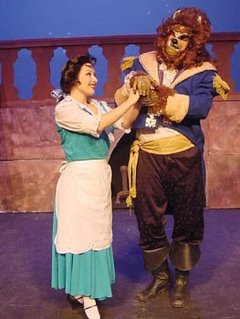 Is Mickey Mouse king of Broadway?

If you look at the new musicals to hit the New York stage it may seem that way. After a successful run on Broadway, “The Lion King” has been touring the country for awhile now, “Tarzan” is still playing on Broadway, “Mary Poppins” just opened, a production of “The Little Mermaid” is expected to open soon, and “Beauty and the Beast” released the rights for community theater productions a couple of years ago.

It’s pointless to argue whether there is any “there” there for these productions (I often feel they are much better as cartoons). They are larger than life and if the music isn’t exactly on a par with Rodgers & Hammerstein, who cares? They’re just plain fun.

A narrator (James Shellhammer) opens the show with the story of the beast's origins: An old beggar woman (Taryn Huber) asks a prince for shelter from the cold, though she has only a single rose to give him as payment. Being selfish and heartless, the prince refuses her, simply because she is ugly. The old woman warns him that true beauty is within one's heart, not one's appearance. To teach him a lesson, she transforms the prince into a hideous beast, gives him an enchanted rose, and tells him that "if he can learn to love another, and earn her love in return by the time the last petal falls, then the spell will be broken. If not, he will be doomed to remain a beast for all time."

Troy Thomas is perfectly cast as the beast. His height is a boon to the illusion of a towering hulk of a creature and he has a magnificent voice to match. He learns to tame his anger as his love for and tenderness toward his “Beauty” grows. His struggles with his complex emotions actually make his “beast” more appealing than the handsome prince he ultimately becomes, and it is easy to see why Belle was won over.

Buffee Ann Gillihan is Belle, the feisty heroine of the story, a girl who is “different” from her peers because she loves books and lives a rich fantasy life, dreaming of a better life and a happily ever after. When her father (Rodger McDonald), an eccentric inventor, becomes a captive of the Beast, Belle offers to take his place, and thus the story begins. Like Thomas, Gillihan is perfectly cast as the idealistic Belle whose heart is touched by the Beast she begins to tame.

Not only is the Beast a victim of the witch’s curse, but also his entire castle staff, who will slowly become tea cups, candles, items of furniture, and other household items.

Laurie Everly-Klassen must have found this either a costumer’s dream, or a costumer’s nightmare. Her costumes for the household staff are simply wonderful. The only slight criticism that one might make is that in other productions of this show, as time progresses, the costumes become more elaborate, indicating that the characters are closer to becoming the thing they represent. Lumiere, for example, is a candlestick and should become more candle-like as the show progresses. However, it is but a very slight criticism because one can hardly fault the costume designs.

The actors themselves are all top notch. Kevin Caravalho is Lumiere, a deliciously fussy maitre d’ who is in the process of becoming a French candlestick.

Cogsworth, the castle’s major domo is played by Jim Lane, who may perhaps be giving the best performance I have seen him give to date, in his transformation into a clock.

Jodi Serrano is delightful as Mrs. Potts, the teapot who sings the show’s title song. Her son Chip, a teacup, is the adorable Abby Miles.

Amy Vyvlecka is charming as Babette, the feather duster.

Scott Woodard is Gaston, the town’s nefarious hunk who has set his sights on Belle and is determined to marry her. Gaston’s good looks are exceeded only by his ego. Woodard is the villain you love to hate, and as male chauvenists go, none can hold a candle to this Gaston.

Gaston’s hapless lackey, LeFou, was the delightful Bobby Grainger, a character with little brains, who is routinely slapped around the stage by Gaston.

This is one of those happily-ever-after stories that will make little girls want to go out and kiss frogs to see if maybe there really is a prince trapped inside. It is highly recommended family entertainment.
Posted by Bev Sykes at 4:19 PM