This appeared in The Davis Enterprise on 11/2/06 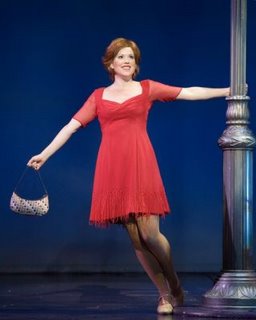 Charity Hope Valentine is a girl with an indomitable spirit who, though buffeted about by the vagaries of love, somehow manages to keep her head held high.

“Sweet Charity,” is the musical developed by Bob Fosse for his wife Gwen Verdon in 1966, brought to film in 1969 starring Shirley MacLaine, revived on Broadway in1986, starring Debbie Allen, and again in 2005 under the direction of Walter Bobbie, starring Christina Applegate. The show is now touring the country, directed by Scott Faris with new choreography by Wayne Cilento and former brat-packer Molly Ringwald, now all grown up, in the title role. The show opened last night at the Sacramento Community Center Theater, and runs through November 12.

Loosely based on Federico Fellini’s “Nights of Cabiria,” this entertaining musical has a book by Neil Simon, music by Cy Coleman and lyrics by Dorothy Fields, a winning combination any day.

As the show opens, Charity is waiting for Charlie (Adam Perry), the man she is certain is going to propose to her (forgetting that little business about his wife, of course). She fantasizes about the wonderful life they are going to have together, and is obviously not prepared for his pushing her into the lake and stealing her purse instead.

Charity returns to the Fandango Club, where she works as a taxi dancer, dancing with any man who can pay for the privilege, and she sings about how she is through with men and won’t let herself be taken advantage of again.

Now hear this and get this
Hold this and Amen
This big fat heart ain't gonna be joined apart
Ever, ever, ever again!

Naturally this is a vow she cannot keep and soon she finds herself swept off her feet by the Italian film star, Vittorio Vidal (Aaron Ramey), trying to make his mistress (Angel Reda) jealous. A night of dancing at the ritzy and rather bizarrely decorated Pompeii Club and Charity winds up back in Vidal’s apartment, where she can’t contain herself at the thought of being with the famous heartthrob (“If they could see me now”), but just as things are heating up, the mistress arrives at the door and Charity is thrust into the closet to keep her out of sight. This gives Ringwald the opportunity to do some very funny physical comedy.

Determined to do better for herself, Charity attempts to take a class at the local YMCA and ends up stuck in an elevator for a long time with Oscar Lindquist (Guy Adkins), a shy, claustrophobic accountant trying to get to a class about self esteem. The elevator scene is one of the best in the show, with a box that moves upwards off of the stage. Adkins does some amazing gymnastics, as his claustrophobia worsens.

The two are rescued at the start of Act 2 and Oscar invites Charity to his Rhythm of Life church, a scene which seems quite dated and perhaps a throwback to the psychedellic 60s, as “Daddy Johann Sebastian Brubeck” (David Gilespie), with a huge Afro, sings “The Rhythm of Life.”

Oscar seems to be the man Charity has been waiting for all of her life, especially after she confesses what she does for a living and he tells her he doesn’t care, and that he wants to marry her anyway, but ultimately her past becomes too much for Oscar to accept and Charity finds herself back in the lake again, her hopes--and her body--doused once more.

Like Cabaret’s Sally Bowles, however, Charity won’t let it get her down and her final exit is a triumph of her spirit over her disappointment.

Ringwald has a winning earnestness about her which surpasses her limited dancing abilities. You can’t help liking her Charity. She has been sabotaged, however, by the costumer (William Ivy Long). While the dress she is wearing in the publicity photos is lovely and seems perfect for the role, she is instead saddled with a triangular shaped dress which makes her look bottom-heavy, and its red color seems to clash with just about everything, making her the odd man out in every scene.

Cilento’s choreography doesn’t have the sizzle of Bob Fosse, but there are excellent numbers, such as the taxi girls’ “Hey, Big Spender” and “There’s got to be something better than this,” a special for Charity’s friends Nickie (Amanda Watkins) and Helene (Kisha Howard).

“Sweet Charity” is an enjoyable evening, not without its flaws, but one which is entertaining and which answers the question “Whatever happened to Molly Ringwald...?”
Posted by Bev Sykes at 6:00 AM