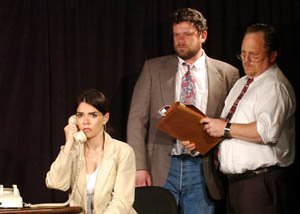 It’s becoming more popular these days: blind dates. You can meet a potential mate through a dating services like e-Harmony, or check out an ad on MySpace or Craig’s list. The embarrassment of meeting a total stranger for the purpose of possibly finding a soulmate seems to be dissipating. But you always run a risk when going through an uninvolved third party. How much safer it would be to meet someone through a friend.

Theresa Bedell (Stephanie Gularte), an overworked writer whose last date was 15 months ago when her boyfriend left to go to Kuala Lumpur (“he didn’t ask me to go with him”) agrees to meet Tony (David Campfield) for drinks, on the suggestion of a mutual friend, in a Capital Stage production of “Boy Gets Girl”by Rebecca Gilman, directed by Jonathan Williams and playing now on the Delta King.

While both graduated from the University of Michigan, the similarities end there. Theresa has a quick, dry wit, loves sports, and is well read, while Joe’s level of intelligence seems to stop with People magazine. As the two make awkward conversation, one begins to get the notion that this is a Neil Simon-esque comedy.

Though things don’t click instantly, Theresa likes Joe enough to agree to a second date, for dinner, “in a few days.”

Joe, however, is not one to wait. Flowers arrive at Theresa’s office at World Magazine the next day and he calls to set the date that night. The two meet again and the disconnect between them is more apparent than before. Theresa decides to be honest, to let Joe know that it just isn’t working for her, and she leaves the restaurant.

That’s when her personal hell begins.

At first it is just annoying--flowers each day, each with a note hoping for another chance, then constant phone calls. Joe shows up at her office to invite her to lunch, clearly not taking no for an answer. She stops taking phone calls and he fills her phone message box with messages, each more angry than the next. As the level of threats escalates, the police are called in and Theresa finds out how powerless she is against her stalker. Detective Madeleine Beck (Tamara Walters) explains that her best bet is to change to an unlisted phone number, move out of her apartment, and change her name. All the police can offer her is a restraining order, with no guarantees that (a) they can find Joe to deliver it, or (b) that he will actually follow it.

As the play progresses to a conclusion which may or may not be logical, Theresa becomes increasingly incapacitated by Joe’s threats and actions and so this play, which has very funny moments, becomes an examination of what constitutes sexual harassment, what effect it has on its victims, and on the relations between men and women in the workplace.

Theresa receives tremendous support from her boss Howard Siegel (Peter Mohrmann) and co-worker Mercer Stevens (Harry Harris), but as the play progresses we discover first, how lightly the men initially take her complaints. In a very funny, yet very telling scene between the two men, they discuss how they view women, and the happily married Mercer even admits to having lustful thoughts toward Theresa.

There is also little sympathy coming from Theresa’s young assistant, Harriet, Michelle Murphy, who feels Theresa is just playing hard to get and aids Joe in wooing her.

The play draws no real conclusions about where one draws the line between the relations between men and women and when it steps over the line and seems to leave that decision up to the audience, but you can’t help but feel that whether or not there has been any actual physical contact, Theresa is raped by the system and society over and over again and the play should lead to discussions about what is acceptable and what is not acceptable behavior.

It also shows how people who may have a close working relationship with one another really know very little about each other, and how that may contribute to the underlying strain between the sexes. Theresa, for example, who has worked with Mercer for many years, had no idea he was happily married.

Capitol Stage has another feather in its capand continues to do what it does best--bring thought-provoking entertainment to the Sacramento area with a provocative play, a first-rate cast, and excellent direction.
Posted by Bev Sykes at 12:00 AM