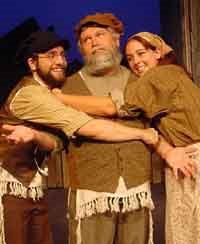 The world is changing for the milkman Tevye (Jeff Nauer). Social mores are changing. Daughters are now falling in love instead of waiting for a match to be made for them. Pogroms and expulsions of Jews are occurring in the surrounding towns and it’s only a matter of time until the Tsar’s iron fist descends on Tevye’s little community of Anatevka. Tevye equates life in these unsettled times with being like a "fiddler on a roof,” trying to scratch out a simple, pleasant tune without breaking his neck.

"Fiddler on the Roof," currently at the Woodland Opera House, is the perennial favorite based on the stories of Sholem Aleichem, with music and lyrics by Jerry Bock and Sheldon Harnick, directed by Jeff Kean (who also designed the scenery). This is a story is about change ... the changing relationships between parents and children, the changing political scene, the change in ... tradition.

Director Kean is fortunate to have a group of principals with experience and excellent singing voices.

Outstanding among them are Tevye’s three daughters, Bethany Pedersen as Tzeitel (she also plays the spirit of Grandma Tzeitel), Julia Mosby as Hodel, and Monika Joyce Neal as Chava. Each give superb performances. Their trio “Matchmaker, Matchmaker” is a delight, and they have sensitive interactions with their father.

Nauer is an engaging Tevye with a big voice and a sincere characterization which was a real crowd pleaser. He accepts his lot in life, but constantly tries to convince God that it wouldn’t spoil him if he were to have just a bit less strife and a bit more wealth (“If I were a rich man”).

Nancy Agee is Tevye’s wife of 25 years, Golde, who knows the way to make a proper home, a quiet home, a kosher home, and who seems surprised, when asked the question (“Do you love me?”), to discover that yes, she really does love Tevye, a thought which had never occurred to her before.

At 20, Joelle Lorin Wirth is a bit young to be playing Yente, the matchmaker, but with the help of make up and black garb she seems to pull it off, though at times it seemed more of a caricature than a believable character.

Clocky McDowell is making his Woodland Opera House debut in the role of Motel the Tailor, but he is not new to either the show or to the role, having played it previously at Runaway Stage Productions. There is an earnestness and a sincerity in his portrayal of this poor young man asking for Tzeitel’s hand in marriage.

Scott Woodward’s fervor for political causes was palpable in his role as Perchick, the student from Kiev who offers to teach Tevye’s daughters and ends up marrying Hodel.

The character of Feydka is described as “a literate Russian,” and Kyle Hadley adds an element of sweetness which appeals to young Chava, who shares his love of literature and, ultimately, falls in love with the soldier as well, the one sin her father finds unforgivable.

Costumes for this production are by Laurie Everly-Klassen and suitably depict the life of poor peasants in a small shtetl in Russia, so it is surprising that Tzeitel’s wedding dress, with its lace trim and netting and jeweled veil seems so out of place. Is this really what a young bride from a poor family would wear on her wedding day?

Eva Sarry’s choreography was enjoyable and the traditional “bottle dance” at Tzeitel and Motel’s wedding was the expected knockout.

Erik Daniells is musical director for this production. The choral work was particularly lovely, especially for the Sabbath dinner, with the entire cast, holding lighted candles, distributed along the stage, and in the audience, including the balcony. This is always such a moving scene and does not disappoint.

Program bios are generally forgettable, but given the tenor of the times in which we live, the bio for Micail W. Buse (who plays the Rabbi in this production) sums up the production beautifully: “The oppression shown in this show still goes on: in Sudan, Palestine, and on virtually every continent on the Globe. I ...hope that all people will live in harmony, without regard to race, religion or ethnicity.”

“Fiddler on the Roof” continues at the Opera House through October 29 and patrons should be advised that evening performances now start at 7:30, instead of the usual 8 p.m.
Posted by Bev Sykes at 7:41 AM