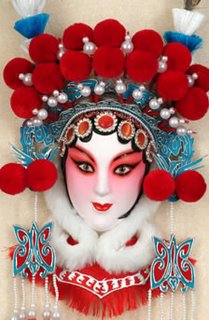 For two more nights only there is the rare opportunity to see the first world tour of the Shanghai School of Chinese Opera at the Wyatt Pavilion.

The 13-person performing troupe is visiting the campus through an exchange program between the Department of Theater and Dance and the Shanghai Theater Academy and will perform “The Colorful Essence of Beijing Opera,” which features extracts from five famous operas, “Farewell, My Concubine,” “Golden Monkeys Welcoming the Arrival of Spring,” “Madam Mu Guiying Becomes a General,” and “Yang Yuhuan Gets Drunk.”

In the Western World, we have a good idea of what to expect when we attend an opera. Leave those expectations at home as you enter the theater. Chinese traditional opera is a comprehensive performing art which combines singing, music, dialogue, acrobatics, martial arts, and pantomime. It is one of the three oldest dramatic art forms in the world and dates back to the Tang Dynasty (618-907). It represents the culmination and distillation of two thousand years of Chinese civilization.

Though it evolved from folk songs, dances, talking, and distinctive dialectic music, it is unlikely that most people in the audience will be rushing to buy a copy of music from Chinese opera to relax to some evening, as the sound is quite harsh to a western ear and in places may resemble a catfight.

(For this performance, the group uses recorded music (unfortunate in a couple of pieces where the sound system was rather mushy), primarily because of the expense of traveling with a band. The performers mouth the recorded words, though the recordings are of the actual performers themselves.)

But the music is only a small part of what Beijing Opera has to offer. (The term “Beijing Opera,” by the way, does not necessarily mean that it comes from Beijing. There are several types of Chinese Opera, and Beijing Opera has come to be regarded as the national form.)

The appeal of this performance starts with the large posters which line the walls of the Wyatt Pavilion. Next are the colorful, ornate costumes and the detailed make-up. Exaggerated designs are painted on each person’s face to symbolize the character’s personality, role, and fate. Generally, a red face represents loyalty and bravery; a black face, valor; yellow and white faces, duplicity; and golden and silver faces, mystery.

Finally, the actual movement itself, which can be almost balletic in its grace and beauty, as in “Tian Nv Scattering the Flower,” where Buddha has arranged for Tiam Nv (Sun Li) to scatter flowers for an unnamed ceremony. The costume for this piece includes two very long multi colored pieces of cloth which trail behind the actress and which she spins and snaps and twirls to represent the scattering of the flowers. It was my personal favorite piece of the evening.

At the opposite end of the spectrum would be “The Crossroads,” set in an inn at night. Though performed in full light, supposedly the characters (Ji Yongxin as Ren Tanghui and Li Mingyang as Lin Lihua) are in the dark as they perform a very complicated martial arts dance as they grope their way around the room trying to find the enemy who is supposedly lurking there.

There are 9 numbers in all (no intermission), each introduced in Chinese by Shang Changrong, the Chairman of the Chinese Theater Artist Association, and translated by a woman who struggled so with English that she was almost as difficult to understand as Mr. Changrong.

Some highlights included “Yang Yuhuan Gets Drunk” with Shen Yilang in the title role wearing the most ornate costume of the evening; and “Reed Marsh,” with Kan Xin as Zhang Fei, wearing black makeup round his upper face and still managing to make the best expressions with his eyes. “He is very good at kicking,” the translator told the audience, upon which Fei proved her right with some amazing high kicks.

My companion liked the opening number, “Golden Monkeys Welcoming the Arrival of Spring,” with bright yellow costumes, snapping and waving flags, an impossibly long set of feathers on the headdress of Zhang Shanyuan as Sun Wukong, the Monkey King, and acrobatics that would rival that of any Olympic athlete.

Several of the performers were only 13 years old and their precision, athleticism, and professional demeanor is a great testament to the school’s teaching.

In a full-length opera there would be more scenery, more people on stage, and live music, but for most of us, this may be the closest we’ll get to a full-length performance. It’s well worth the experience and at only and hour and 45 minutes, it’s a short evening, but you definitely won’t feel shortchanged.

On Friday from 1 p.m. to 3 p.m., the community is invited to a free costume and make-up application demonstration at Wyatt Pavilion.
Posted by Bev Sykes at 7:46 AM