To Kill a Mockingbird

This review appeared in The Davis Enterprise on 10/11/06. 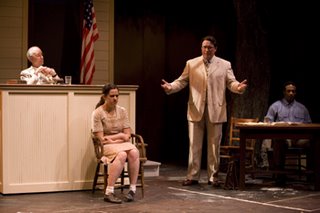 In 1960, Harper Lee published a book called “To Kill a Mockingbird.” It was an instant hit and won the Pulitzer Prize for fiction in 1961. In 1962, a film directed by Alan J. Pakula won an Academy award for Gregory Peck, in a role which has become legendary, that of Atticus Finch, the quiet attorney from the fictional town of Maycomb, Alabama, who defends Tom Robinson, a local Black man, who has been falsely accused of raping a white woman.
In 1970 Christopher Sergel turned the story of that memorable summer in Maycomb into a stage play, and it is the tremendous good fortune for local audiences that the Sacramento Theater Company has decided to present Sergel’s adaptation as the opening show of the company’s 65th season.

Directed by Philip Charles Sneed, this production is first class from the moment the audience enters the theater and sees the beautiful set, designed by Troy Hemmerling and artfully lit by lighting designer Pamila Z. Gray, who uses subtle sky/cloud effects to mark the passage of time. The effect of a sleepy Alabama street is perfected by the amazing tree, built by sculptor Mitchell J.P. Martinez

The world never seems as fresh and wonderful, comforting and terrifying, as good and evil as it does when seen through the eyes of a child, and through the memory of the adult Jean Louise Finch, the girl who used to be called “Scout” (Carolyn Howarth), we are transported back to 1935 and the events of that memorable summer, as seen through the eyes of the young Scout (Paige Silvester) and her older brother Jem (Brennan Villados).

Silvester and Villados are considerably older than the 6 year old Scout and 8 year old Jem of the book (Villados is actually in college, though his youthful appearance works for this role), yet the two seasoned young actors are able to bring all the innocence and wonder that is expected to the roles.

As their new friend, Dill, who arrives in Maycomb for the summer, Jake Murphy is outstanding.

Taking on the role of Atticus Finch, one of the more recognizable figures in movie history, is a difficult one, yet Mark Standriff handles it beautifully. He is the wise father, teaching his children through his gentleness, yet resolute in standing up for his principles. (It is unfortunate that the material costumer Clare Henkel chose for his suit wrinkles so badly that when giving his impassioned speech to the jury, his pants looked like they’d been wadded up in the laundry bag).

Matt K. Miller is deliciously sleazy as the white trash Bob Ewell, insisting on retribution for the violation of his daughter Mayella (Katie Rubin), when it is clear to everyone that Mayella’s violation has been at Ewell’s own hands. (Miller also appears briefly as Mr. Radley.)

Rubin herself has few lines, but is the central figure of the Act 2 trial and her sullen demeanor leaves no doubt about what this poor girl’s home life is like. Rubin is a talented actress and she makes the most of her smaller speaking role.

Jamal Kelly is the gentle Tom Robinson, the defendant in this infamous trial, finding himself in an impossible situation, with clearly little doubt about his future in this southern town where feelings against the black community run high.

George Schau plays the mysterious Arthur (Boo) Radley, the Finches’ next door neighbor who never leaves his house, and who is the “boogie man” in the lives of the children. (“He eats raw squirrels and all the cats he can catch. There's a long, jagged scar that runs all the way across his face. His teeth are yella and rotten. His eyes are popped. And he drools most of the time.”). Schau also appears earlier in the play as Walter Cunningham, a client of Atticus with his own apparent deep hatred for the black community.

Linda Goodrich is Calpurnia, the Finches’ maid, who fills the disciplining role of the children’s late mother.

Others in this superlative cast include Georgann Wallace as the grumpy neighbor, Mrs. DuBose, Dan Harlan as Judge Taylor, David Silberman as Heck Tate, Wayne Cook as the Reverend Sykes, and Miles Miniaci as Mr. Gilmer.

This is a professional production in every sense of the word. It is a visual delight, the cast is top notch and for anyone who loved the movie, or for those who are not familiar with the movie, this play is a must-see.
Posted by Bev Sykes at 1:15 PM

Your article doesn't explain enough of what you think represents the mockingbird...since that is part of the title.

A critic has a strict word limit and discussing the finer points of the plot are not the purpose of a review. It is the job of the critic to give the audience a sense of what the play is about and how well the actors performed.

Shouldn't "The world never seems as fresh and wonderful as comforting and terrifying as good and evil as it does when seen through the eyes of a child" be in quotations since that is what Gregory Peck says in the films trailer?