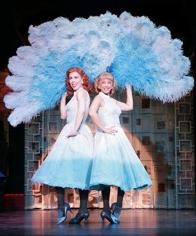 Ask anyone to name their top five Christmas themed movies of all time and it’s a pretty sure bet that “White Christmas” will be on the list for most people.

When you transfer such a well-known and beloved film to the stage, you’d best be very careful to do it well, because a large portion of your audience is going to be watching to see how good a job you do.

Judging by the enthusiastic response on opening night of “Irving Berlin’s White Christmas” at the Sacramento Community Center, the experiment was an overwhelming success, despite what must have been a technician’s worst nightmare, with curtains that refused to cooperate (several times), lights that went on when they shouldn’t and off when they shouldn’t, audible banging from backstage, and set pieces that didn’t quite get into place on time.

Yet, the technical glitches didn’t seem to matter in this slick holiday pastiche, which will run through January 7.

While this show is, of course, based on the 1954 musical with Bing Crosby, Danny Kaye, Rosemary Clooney and Vera Ellen, don’t expect it to be a carbon copy.

The story of the famous song and dance team of Wallace (Michael Gruber in the Crosby role), and Davis (Greg McCormick Allen) who meet aspiring sister act of Betty Haynes (Christina Saffran Ashford in the Rosemary Clooney role), and Judy Haynes (Tari Kelly), and head to a ski resort which turns out to be run by Wallace & Davis’s old World War II commanding General (Stephen Godwin), who has fallen on hard times and is looking at a bleak ski season, as Vermont is experiencing unseasonable warm temperatures is familiar.

The story turns into a “find a barn and put on a show to save the General,” and it all ends predictably with beautiful snow on stage and in the audience.

However, there are plot differences from the movie, new characters and character twists, and additional Irving Berlin songs not found in the movie, such as “I Love a Piano” (which film buffs will recognize from “Easter Parade,” not “White Christmas”) and “Blue Skies,” to name but two.

Michael Gruber has a lovely crooning voice, displayed best in his “Count Your Blessings.” Greg McCormick Allen is a talented hoofer with a pleasant demeanor who is a good partner for Gruber.

Christina Saffran Ashford displays a lush voice with her emotional delivery of “Love, You Didn’t Do Right By Me” and Tari Kelly (the role will be played by Taryn Darr beginning December 29) has a bubbly personality and gets a chance to shine in several dance numbers, especially the spectacular “I Love a Piano.”

Carol Swarbrick plays Martha Watson, the sardonic inn housekeeper immortalized by character actress Mary Wickes in the film. In this version of the story, however, Martha has a show biz background and when she belts out “Let Me Sing and I’m Happy,” she brings down the house.

Stephen Godwin was a world-weary General Waverly, who becomes a sentimental favorite as he tries to make the adjustment from military to civilian life, even 10 years after the end of the war. My only disappointment with this production is that “The Old Man,” Waverly’s surprise at finding all his old military outfit at the Inn, doesn’t pack the emotional wallop of the film.

Keaton Whittaker (who alternates with Olivia Spokoiny) is Susan, the General’s young granddaughter, who has show biz in her genes and belts out her own reprise of “Let Me Sing.” Whittaker is a real scene stealer and clearly an audience favorite.

Making the most of a the tiny role of Ezekiel, the stage hand, Clayton Corzatte was perfect and received an ovation at the final bow.

Anna Louizo’s set design was beautiful, with both detailed settings for the inn and splashy backdrops for the big dance numbers. The closing snow scene was straight from Currier and Ives.

Costumes by Carrie Robbins were straight out of 1954, with the huge crinoline skirts for the girls and shocking bilious green suits for Wallace and Davis’ first big production number.

The production is under the direction of James Rocco and David Armstrong and one of only four cities given special permission to present this new stage adaption during this holiday season.

Ticket sales are brisk, but there are a still few left to be had. Call now for a chance to take your family to see this delightful holiday gift to the Sacramento area.
Posted by Bev Sykes at 3:18 PM

Thanks for the great review, but I just wanted to correct you, in that Olivia Spokoiny played young Susan Waverly in the Sacramento opening. I should know, because I'm her father!

I'm really sorry I didn't know that. That information was not given to me and I went by the photos in the program. Your daughter did a great job!