The Weight of Memory 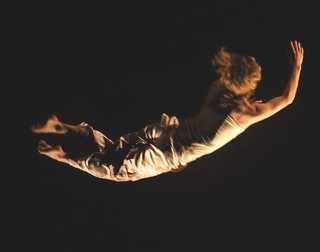 Each season, the UC Davis Theater and Dance Department's Dancing on the Edge series brings new work by contemporary choreographers to the local stage. This year, Granada Artist-in-Residence Ellen Bromberg and choreographer Della Davidson have collaborated to create “The Weight of Memory,” a provocative performance piece combining image, movement, and language.

Bromberg has been creating dances for solo artists and companies for over 30 years. Since 1996 she has been working at the intersection of live performance and media, creating her own works as well as collaborating with other choreographers. In 2005, she collaborated with Della Davidson and John Flax on “A Dream Inside Another,” based on “The Stories of Eva Luna” by Isabel Allende.

Based on ten short verses by writer Karen Brennan that describe one woman's changing inner state as she transitions from sleep to wakefulness, “The Weight of Memory” features seven dancers - one man (David Orzechowicz) and six women (Jennie Amaral, Ann Dragich, Adi Hamou, Meghan Moyle, Randee Pauvfe and Whitney Peterson) - who move through the fluctuating landscape of the woman's inner life. At times dynamic, at times tranquil and meditative, the dancers' movements within an ever-shifting environment of light, video, and sound create a "visual poem" informed by Brennan's acute attention to sensory detail and her ability to capture a moment in time and expand upon it.

The focal point of the work is a bed made of “memory foam,” (accentuating the theme of “memory”), and each of the ten segments (called “the 10 birds”) begins “When I woke up....” and deals with both the man in her bed and the birds which surround her (the reason for which is revealed at the end).

“When I woke up the man beside me rolled over, as was his custom. It was as if he were telling me to go back to sleep. Too many birds in the room, now they were beside me, flicking their feathers.”

This work is a tour de force for the audiovisual department, working with the concept and video design of Ellen Bromberg, scenic design of Victoria Livingston-Hall, and lighting design of Javan Johnson. Three large, irregularly shaped and angled panels define the performance area, described as a “deconstructed room with fluid walls,” and a multitude of projections set the stage for trees blowing in the breeze, birds flying in the air, or simply someone tossing about in bed. The blending of text and dance is indicated before the performance begins, when the text of the narration is projected, and moves across the panels.

Projections of trees rustling in the breeze begin the performance, so well incorporated into the whole that the audience can almost feel the breeze blowing through the theater.

One projection which impressed me was a simple one of a man lying in the bed, next to the live female dancer. Her body made impressions in the foam mattress as she moved, as did his, so that it was difficult to determine whether it was a real dancer or a projection, as the live and projected images blended seamlessly into each other.

“When I woke up it was green and frightening...the birds had arrived and they were insistent...” precedes the most impressive section of the work, a section which would have pleased Alfred Hitchcock, as the lead character is surrounded by birds projected from above and below.

“The Weight of Memory” blends memories, associations, and images together, in a multimedia extravaganza which creates a unique theatrical experience.
Posted by Bev Sykes at 12:37 PM

I suffer from a lot of back pain due to a car accident when I was a child. When it happened I was in pain for a while but after I healed I had very little trouble until I was 15 and my muscles started to develop, I started getting a lot of lower back pain and have suffered with it ever since. That is until recently when I stumbled across memory foam mattresses. They adjust to the shape and weight of my body to support my back perfectly and let me sleep soundly. I can’t even imagine being able to sleep without my memory foam mattress anymore!

here is an intersting fact that may be off some use to you... because supply has recently out paced demand, cheap memory foam mattresses are now widely available. One can now pick up a range of specialist discounted mattresses for around about the same cost as standard equivilants...