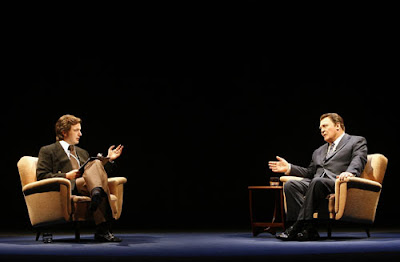 "Frost/Nixon," the Tony Award-winning new play by Peter Morgan, which continues through Sunday at the Sacramento Community Theater as part of the Broadway Series, has been touring the country and playing similarly large venues.

One must ask why.

While the cast does include 11 roles, this is essentially a two-person play; even with the help of a giant multi-section TV screen hanging above the stage, the drama cries out for a more intimate setting.

The timing of the play's appearance also is odd, given the recent release of the highly touted film adaptation, which starred the original Broadway cast. This may have accounted for the smaller than usual audience at Sacramento's opening-night performance.

All that said, there's no denying that this production of "Frost/Nixon" is a compelling drama, and well worth seeing.

Through narration, Jim Reston (Brian Sgambati), a journalist who spent years methodically documenting Nixon's crimes, sets up the background. The story begins with Frost, a talk show host whose popularity had declined in the United States and who was, at the time of Nixon's 1974 resignation, hosting a chat show in Australia.

While the meat of this play concerns the interviews themselves, much of the nearly two hours (no intermission) is spent on details concerning the planning of the interview. Frost recruited Reston and ABC news producer Bob Zelnick (Bob Ari) to comb through all the available information surrounding the Watergate scandal, resulting in the discovery of a conversation between Nixon and Charles Colston: a dialogue that proved the president had obstructed justice.

When the two men finally meet, the interviews have the atmosphere of a boxing match, with each man in his own corner, his own crew on hand to advise and primp between rounds. Nixon, having learned the ins and outs of television, is acutely aware of his "sweating problem" and is careful about where to hide the handkerchief he'll use to wipe the sweat that he knows will make him look guilty.

Cox brings an airy charm to the role of Frost, the quintessential talk show host. By the end of the play, it seems blatantly obvious that the admissions he elicits from Nixon stem from Frost's experience on the talk show circuit, and his intuition about people. He allows long silences for Nixon to fill, for example.

One wonders, all these years later, if the interviews would have been as successful if the questioner been someone as hard-hitting as Mike Wallace (who also requested an interview with the former president).

Stacy Keach's Nixon is, without question, the play's highlight. He does not attempt to look like the former president, or copy Nixon's distinctive speech patterns. Yet Keach has the mannerisms down, and we quickly accept him in the role. His strength as Nixon grows as the play progresses, and may hit its peak during a late-night telephone call (apparently invented for effect) the president makes to Frost, the night before the final portion of the interview.

At this moment, Nixon finally reveals his sense of insecurity.

During the final interview, Frost slips into the driver's seat and becomes the hard-hitting reporter his handlers wanted him to be all along. Close-ups on the overhead screen show a subject — Nixon — brought face to face with the proof of his complicity, and a realization of what he had done to the country.

The moment is masterful.

Last week's audience was smaller than usual for opening night, which is a shame; this powerful piece of theater deserves to be seen.
Posted by Bev Sykes at 10:24 PM