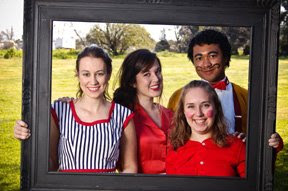 As I walked toward the UC Davis Main Theater in the approaching twilight, I saw what looked like a headless white torso sitting on the ground, with a golden cap where its head should have been.

As I drew closer, the torso began to move; it was a girl with a blond pony tail, sitting on the ground, her head lowered to her chest. I then realized that others were in various poses all around me, moving very slowly, while a recording of bell sounds emanated from an unseen speaker somewhere in the bushes. More bodies in slow motion were at the theater door, as well as inside the lobby.

Part two of the piece opened the second half of the show, while an original video by Kwame Braun played on the back wall.

'Symmetry Study #15' is one of an ongoing series of installations and presentations built around the concept of symmetry. Patrons will be amazed by the control of the bodies, and the difficulty of adopting - in such slow motion - what sometimes are very intricate poses.

The video, an overhead shot of other dancers going through various couplings, suggests the effect of watching a colony of slow-moving June bugs.

After many years of reviewing this annual dance show, I've learned that one never knows what to expect. The production always features something interesting, and something to delight.

I had two 'delights' this year.

Feineman-Klausner's work is the story of a family portrait, charmingly depicted, with many interactions between the parents and two daughters. As the choreographer explains, the work 'explores how idiosyncratic members of a family together form as a unit, and the relationships they have with one another.'

The music for this piece is created by composer/sound designer Isaac Blackstock, whose influences are from romantic and contemporary composers such as Gustav Holst and Danny Elfman, and the electronic music of Hirokazu 'Hip' Tanaka. This variety of stylistic influence lends an eclectic and modern edge to the score.

I also enjoyed 'Aller/Arret (Go/Stop),' choreographed and danced by Kelly Fleischmann, accompanied by Shayna Carp and Eva Loney. This more traditional dance style uses familiar pieces of music to demonstrate how life is in a constant state of momentum, which inevitably stops to change direction.

'Life takes us on a journey that often can be monotonous until we're given a chance to just be free,' according to Fleischmann.

Nothing is monotonous about Nina Galin's 'Life Among the Institutions,' which opens the program. Galin explains that her work is never quite the same twice running, which is clear from her interaction with the audience - as she enters the theater from the rear - and her use of on-stage props, which have a mind of their own.

She explains that her work addresses the interaction between institutions and individuals, and she notes that, 'Narrowly, the institutions on my mind are the California educational system and Shakespeare.' Her piece is presented while she recites Hamlet's soliloquy while forcing chairs - placed around the stage in a seeming state of disarray - into a greater sense of order.

'Computer Games,' choreographed and danced by Lucas Macdonald, accompanied by Nicole Chaffee, Natasha Cooke, Joya Kazi, Kristi Kilpatrick, Claudia Shekufendeh, Ryan Stone and Baote Wen, explores the interaction of simple rules in the making of a dance. Each performer is given the same set of fundamental commands, based upon the actions of the surrounding dancers.

As with a game of chess, the simple movements of many pieces create a deceptively complex system.

The show concludes with choreographer, scenic designer and writer Tyler Eash's 'I, Saint John, the Speaker.' The piece asks why we gather meaning from our physical and mentally cultivated environment, and examines how we find value and potential spectacle in mundane performance.

The 'Main Stage Dance/Theater Festival' continues through Sunday ... plenty of time for you to discover your own delights.
Posted by Bev Sykes at 12:37 PM