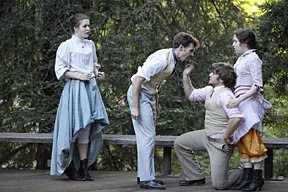 On the off chance that you might be tempted to leave the UC Davis Arboretum's Wyatt Deck before the final bow from the cast members of Studio 301's wonderful production of 'A Midsummer Night's Dream,' don't do it ... or you'll miss one of the most delightful parts of the show.

And I won't spoil the surprise by telling you why.

Studio 301 is the only student-run theater group on the UCD campus that is dedicated to producing full-length plays.

This year's production is Shakespeare's charming fantasy, and choosing the Wyatt Deck - across the street from Wyatt Pavilion, smack dab in the middle of the redwood grove - as a venue was inspired. Who needs sets, when your audience already is surrounded by redwood trees?

In fact, the show's sole 'set' is two boxes on which characters sit at various times.

As the play opens, fairies climb onto the stage from the Arboretum below. Peaseblossom (Kellie Peake), Mustardseed (Ashley Bargenquast) and Cobweb (Fumni Alabi) emit somewhat annoying bird-like chirps and cackles as they communicate with each other throughout the show, but their interpretations are captivating.

The play tells several stories, each of which occurs during a single summer night in a magical forest outside Athens, where fairies play pranks on lovesick mortals, earnest youths endure comical romantic confusion, and some 'mechanics' attempt to rehearse a play in secret.

Director Steph Hankinson has updated her play to the forests of Appalachia in the 1910s. David Lutheran and Katie Walton, as Thesius (the Duke of Athens) and Hippolyta (Queen of the Amazons, betrothed to Thesius), direct the evening's events, with their request to Philostrate (Chrisy Moore) to arrange entertainment for their upcoming nuptials.

These three actors assume two roles each, with Lutheran and Walton also playing Oberon and Titania, the king and queen of the fairies, and Moore also appearing as Puck. Moore is a particularly mischievous Puck, and wears an ingenious costume designed by Elizabeth Burciaga - who deserved better credit in the program, which merely lists her bio among those of the performers - which permits her to slip easily from one character to the other.

Plans are interrupted by the arrival of Mr. Egeus (Kris Ide), a nobleman requesting help in forcing his daughter, Hermia (Katelyn Hempstead), to marry Demetrius (Brendan Ward), the husband of his choosing; Hermia, alas, is in love with Lysander (Michael Lutheran).

To further complicate things, Hermia's friend Helena (Cody Messick) is in love with Demetrius. All this sets the stage for twists and turns that develop over the course of the story.

The mechanics are rehearsing in the woods, under the direction of Quince: a delightful interpretation by Alison Stevenson. Her four actors include Nick Bottom (Daniel Guttenberg), the weaver, who plays Pyramus in the troupe's production of 'Pyramus and Thisbe,' and who later is turned into a donkey by Puck.

Guttenberg is outstanding as Bottom, who is full of advice and self- confidence, but makes silly mistakes and misuses language. Instead of the traditional donkey's head, he merely sports donkey ears, which makes him a mere oddity rather than the bizarre half-man/half donkey one expects.

Heidi Kendrick is Flute, a young man who argues against appearing as the very feminine Thisbe. Kevin Ganger is Starveling, a stereotypical backwoodsman who'd rather whittle than perform; Kristina Stasi is Snout, the tinker, who also plays the Wall.

This group of mechanics is right out of 'O Brother, Where Art Thou,' with their stumbling backwoods manners. The scene at the Wall is decidedly unique ... and I'll leave it at that!

This 'Midsummer Night's Dream' is a delicious piece of merriment: a nice diversion on a warm summer's evening. Take the night off and go romping with a bunch of fairies in this actual and magical forest.
Posted by Bev Sykes at 8:31 PM