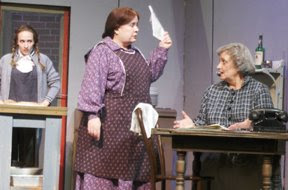 The Woodland Opera House's current production of 'Rose Colored Glass' by Janice Goldberg and Woodland-born playwright Susan Bigelow (directed by Jeff Kean) is a show that you want to take to your heart. It's the story of how the plight of an 11-year-old Jewish boy from Austria dissolves the long-time animosity of two women in Chicago in 1938 as they join together to work to find him safe passage from Europe and a home in the United States.

The play has heart, it has pathos, it has three excellent actors. What it lacks is, sadly, a better script. At times it seems overly long. It's not sure whether it's a history lesson or a soap opera. It's not a bad play. It's a play worth seeing. But its problems definitely lie primarily with the script.

Lady O'Riley (Cheri Douglas) runs an Irish pub in Chicago. She's a widow and has run the pub ever since her husband's death. She is also raising her 13-year-old granddaughter Peg (Emily Jo Seminoff), whose ne'er-do-well father abandoned the child on his mother's doorstep after the death of his wife.

Across the alley from the back of O'Riley's pub is the delicatessen of Rose Fleishman (Georgann Wallace). Rose is also a widow, originally from Austria, who left family behind when she and her husband came to the United States.

The two women have never spoken, and their animosity toward each other and their distrust of one another seems strange, but they are both firmly rooted in their own cultures and not willing to interact with someone who seems so 'foreign,' even though their circumstances are so similar.

Young Peg, who acts as the narrator of the piece, is the eternal cock-eyed optimist, determined to get the two women to make friends. She spends a lot of time in Fleishman's delicatessen and obviously has a warm, loving friendship with Rose.

The ultimate breaking down of the barriers between the two women comes, slowly, after Rose receives letters from her sister in Austria, hinting at the problems that Jews are beginning to have. It is a time in this country where there is great apathy on the part of Americans and articles hinting at persecution of Jews are relegated to the back pages of the newspapers.

When Rose receives a disturbing letter from her sister, Peg forces her grandmother to get involved. Slowly the two women strike up a friendship.

The play takes Rose through the maddening world of red tape and closed doors and the world of the bureaucratic 'no.' At one point she gives up completely and has to be convinced by her new friend that miracles still happen. Just when she has all but given up, help comes from a most unlikely source.

Between the brief vignettes over time, Peg steps into the alley to give the audience an explanation or an update. Often these discourses are backed by concentration camp photos or news clips running on the back wall.

I really wanted to like this play, but there were many problems. The parallel story of Lady's son, for example, while perhaps intended as a plot device to bring a degree of commonality to the situation of the two women, was merely distracting, especially since it went nowhere.

Rose's anger as she gives up on this nephew she has tried so hard to save seems unrealistic, when it is her neighbor who is adamant that the woman keep trying to bring the boy to safety.

Lady's refusal to allow Peg to skip school to accompany the women to New York when it seems that all their work is going to come to fruition is completely unbelievable.

There is no difficulty with the three talented actresses. Emily Jo Seminoff has blossomed into an accomplished actress and is enchanting as the ever-positive Peg.

Cheri Douglas is, according to her biography, 'making her debut in professional theater.' If this is her debut, it holds the promise of a wonderful career, as she beautifully walked that tightrope between stubborn Irish woman and warm-hearted friend.

Georgann Wallace, veteran of several Woodland Opera House productions, gives an emotional performance as Rose and makes the audience feel her anguish and her frustration over the plight of her family.

After World War II, the cry became 'never again!' Never again would the world sit back and do nothing while millions of people were being slaughtered. In an age where that is precisely what is happening in places like Darfur and Rwanda, 'Rose Colored Glass' is an important reminder of the human faces behind genocide. I just wish the script had been better crafted.
Posted by Bev Sykes at 1:00 PM