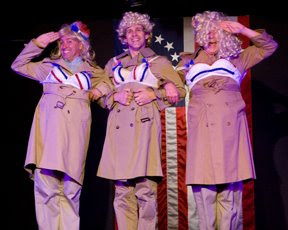 The play was written by Adam Long, Reed Martin and Austin Tichenor of the Reduced Shakespeare Company - perhaps better known for 'The Complete Works of William Shakespeare (Abridged)' - and is directed by Stephanie Gularte.

This production stars Eric Wheeler, Gary S. Martinez and Jonathan Rhys Williams. The three actors work well together, and their chemistry may be due, in part, to their previous collaboration on 'Every Christmas Story Ever Told,' presented at the Delta King in previous years.

Like Stan Freberg did in his 'Stan Freberg Presents the United States of America' back in the 1960s, Long, Martin and Tichenor adopt a 'take no prisoners' approach while closely examining the country that gave the world 'its first democracy, man on the moon, Mark Twain and 'America's Next Top Model.' '

(The 'first democracy' may not be quite right ... but let it pass.)

Where Freberg chose to start with Columbus and Isabella negotiating the price of sailing ships, Long, Martin and Tichenor begin with Amerigo Vespucci and his wife Sophia, as they debate the value of his world maps.

'I'm trying to make a name for myself,' he tells her.

And then he sets sail to fulfill his dream, 'in a vessel full of dreams, pastrami and cheap wine' ... to the theme from 'Gilligan's Island.'

From there, it's a quick trip - well, two acts - to sorta-kinda the present day, skipping a decade or two because nothing really happened.

You'll hear Betsy Ross (and her sister Diana) explain how the design of the flag happened to be chosen. You'll see witch-hunting Puritans in Massachusetts and the Rev. Feral Orwell, who leads his youthful parishioners in games of Pin the Blame on the Warlocks and (literal) Hangman.

Along the way, the play includes enough to delight (and offend) just about everybody. During the post-production chat with the actors after the show the night we attended, a woman expressed her discomfort with how the script treated Native Americans. Someone else was bothered by the treatment of the assassination of Lincoln. Someone else was offended by the depiction of a female Vietnamese spy (Jo Chi Minh, whose brother's name is Ho).

But it's all in good fun, and nobody is spared the playwrights' barbs, and the end result is hilarious.

Each actor plays many roles and literally wears many hats. Martinez, who did well in the slower, more child-like roles of 'Every Christmas Story,' pulls most of the female roles in this production, and plays them to the hilt.

Paulette Sands-Gilbert (costumes), Michael Coleman (props/set dressing) and the backstage assistants who helped with the quick changes deserve huge credit for this show's success. Without the outlandish costumes and props, it would be a very different experience.

The playwrights premiered 'The Complete History' in 1993, and updated the last half of the second act in 2004, before the Bush-Kerry election.

'A number of topical references are in the script. The humor and relevance of these will fade over time, so we encourage each production to change these references, to keep them as up-to-date as possible.'

With that in mind, it's not clear where Long, Martin and Tichenor leave off, and Capital Stage steps in. But the end result is delightful, no matter who wrote it!
Posted by Bev Sykes at 8:17 PM