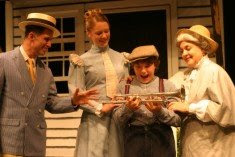 Choreographer Ron Cisneros and Costumer Jean Henderson were the clear winners in the new Davis Musical Theater Company production of Meredith Willson’s “The Music Man,” under the direction of Steve Isaacson. I am consistently impressed with what Cisneros can do with a mixed group of dancers and non-dancers and make it all look cohesive.

And there are lots of people on stage. Perhaps more than I remember seeing on the DMTC stage before (many of them children of varying sizes from adolescent down to very young). The choreography makes this good show a very good show.

As for Henderson, she must have been seeing stars before she finished the costumes. The 4th of July scene is filled with stars and stripes of all sizes. The whole look of the production is crisp and clean and makes the action on the stage pop.

Add to the excellent choreography and costumes is a solid cast of performers, reuniting many old timers who haven’t worked together in awhile.

Rand Martin may not be the most dynamic Harold Hill you’ll ever see, but he handled the role well, unfortunately flubbing several lines at the performance I saw. But Hill is the traveling salesman you can’t not like and Martin does a good job.

Laura Wardrip is excellent as Marian Paroo, the librarian who is not easily taken in by this stranger who promises to create a boys’ band to prevent the youth of River City, Iowa from being corrupted by the new pool table in town. Wardrip has a lovely voice and she looks beautiful, especially in the gown she dons for the town social.

As Marian’s mother, Lenore Sebastian is first class, with an Irish brogue that sounds authentic to this American ear.

Michael Carey rounds out the Paroo family as Winthrop, the shy young boy with a lisp, still brooding over his father’s death two years before, whose life is changed by Hill and his promises.

Gil Sebastian is a bombastic Mayor Shinn, the master of the malaprop and home grown phrases (“I couldn’t make myself more clear if I were a buttonhook in the well water.”) who only wants his town councilmen to “get that spellbinder’s credentials” and to keep the town hoolligan away from his oldest girl.

As Shinn’s wife, Eulalie Mackecknie Shinn, Mary Young has a role to sink her teeth in. She’s awful–but she’s supposed to be and she relishes the chance to sing off key and preen over all of the townspeople.

My one disappointment with the direction or choreography (not sure which was responsible) was for the tableau of Grecian urns done by Eulalie and her women friends. There seemed to be no difference between “one Grecian urn” and “two Grecian urns,” nor did they really create anything that came close to resembling “fountain.” It’s supposed to be bad, but it could have been a little better at being bad.

Marcellus Washburn was Hill’s old buddy from years before, who happens to be in the town when Hill decides to set up shop. He’s Hill’s second banana and there is no better than Paul Fearn. Always reminiscent of Buddy Hackett (who played the role in the movie), Fearn was the perfect choice for this role.

Matt Kohrt is Tommy Djilas, the town hooligan and McKinley Carlisle is Zaneeta Shinn, the mayor’s oldest girl. They make a cute couple.

Rich Kulmann in the small roles of the train conductor and later the town constable had serious projection problems and could barely be heard, something unusual for the veteran Kulmann.

Marc Valdez is appropriately smarmy as Charlie Cowell, the anvil salesman determined to warn the town about Hill before it’s too late.

The "Pickalittle Ladies," who fill Professor Hill in on all the gossip about Marian, are irresistible.

Isaacson is credited with scenic design and I’m giving him the benefit of the doubt, knowing that things often get done at the last minute and the Isaacsons were called out of town for a death in the family. The backdrop seemed to have no correlation to the show itself and added nothing to the look of the stage except a lot of empty sky and buildings out of proportion with what was supposed to have been Main Street.

But even with all of its little flaws, you have to work really hard to do a bad production of “Music Man” and this one is a delight.
Posted by Bev Sykes at 6:13 AM