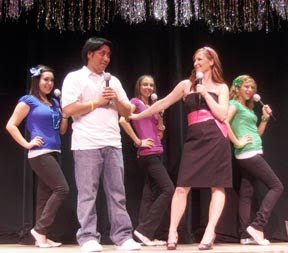 It was obvious, from the cheers that greeted 'High School Musical 2' even before the show began, that the Woodland Opera House had a real hit on its hands.

The audience of mostly high school-age people - and, one assumes, parents of the actors - clapped loudly for every musical number, laughed enthusiastically at all the jokes, and gave the show a standing ovation.

The production unquestionably deserved it. The cast is composed of talented actors who sing well (most of the time), dance energetically and breathe life into a script that is perhaps one of the dumbest I've ever experienced.

But, I kept reminding myself, I had to look at this from an adolescent's viewpoint. That helped significantly.

'High School Musical 2' takes up where the first play left off, as the main characters, now facing summer vacation, realize that they need jobs.

The evil and uber-wealthy Sharpay Evans (Danielle Hansen), who seemed to undergo a bit of a redemption at the end of the previous play, has sharpened her claws again and once more set her cap for the school hunk, Troy Bolton (Eric Catalan).

She therefore arranges for him to have a job at her father's luxurious country club, where she hopes to steal his affections from his girlfriend, the wholesome Gabriella Montez (Shannon Kendall).

Not realizing that his new boss will be Sharpay's father, Troy enthusiastically accepts the job during a phone conversation, without any interview whatsoever, and even arranges for all his friends to obtain employment as well (suspension of disbelief No. 1).

And so the action shifts to the country club, and the battle is on.

Hansen, in her Woodland Opera House debut, makes a perfect Sharpay. She even looks eerily like Emily Jo Seminoff, who played the role two years ago in the local production of 'High School Musical' (and who, with her mother MJ Seminoff, directs this sequel).

Hansen prances about the stage with her minions - 'The Sharpettes': Andee King, Jo Black and Kara Sheldon - like the little princess she's supposed to be, and successfully becomes the girl we love to hate.

Catalan, who made an impression as Troy's friend Chad in the previous production, has moved into the role of Troy and does a very good job. His angst-ridden 'Bet on It' - during which he tries to decide whether turning his back on his values, in order to get a college scholarship, is worth it - is one of the show's highlights.

Kendall, a senior at Sacramento State University, gives a wholesome, freshly scrubbed look to Gabriella, the girl who tries to keep Troy grounded. Kendall has a lovely voice and has the sort of presence that holds our attention whenever she's on stage.

Back in 2007, while reviewing the local production of the first 'High School Musical,' I noted, 'Worth watching in the chorus is young Casey Camacho, who has no speaking lines and is merely one of the crowd, but is so enthusiastic about his role that he stands out.' Two years later, Camacho has come into his own as Jack Scott, the high school DJ who also becomes the emcee for all the resort events. He's a real firecracker, and it's good to see him in such a prominent role.

Choreographers Emily Jo Seminoff and Tyler Warren have done yeomen's jobs while creating several energetic musical numbers, and the cast pulls them off quite well.

While the songs are forgettable, the visuals on stage are fetching, particularly during a lively take on 'Humuhumu-nukunukuapaua'a' (which bears little resemblance to the familiar Hawaiian tune) and 'I Don't Dance.'

But my dislike had everything to do with the brainless script and nothing whatsoever to do with the production, which is sparkling and will delight every adolescent in the audience.

The kids leave the resort at the end of the summer to return for their final year of high school, and yes, 'High School Musical 3' is waiting in the wings...
Posted by Bev Sykes at 4:54 PM