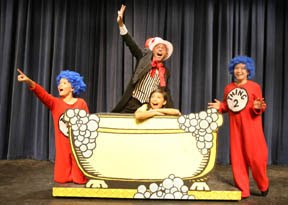 Every one of our children liked Seuss books a lot
Then I heard of a musical - This would be hot!
Horton, the Grinch, silly Mayzie, the Cat...
Davis Musical Theatre was where it was at.

(With apologies to Dr. Seuss and grammar buffs everywhere.)

'Seussical' is the kind of musical that showcases the Davis Musical Theatre Company at its best. It's visually a delight, with a host of brightly colored costumes designed by Denise Miles. The large cast includes many of DMTC's Young People's Theater performers, which demonstrates the strength of that program.

The tunes are lively, and Ron Cisneros' choreography is energetic and well-executed.

The show, based on 15 books by Dr. Seuss (Theodore Geisel), weaves familiar characters together in unusual ways while incorporating some 32 tunes written by Lynn Ahrens and Stephen Flaherty. The songs aren't particularly memorable, with the exception of the opening 'Oh the Thinks You Can Think' and the rousing encore number, 'Green Eggs and Ham.'

Director Jenifer Price has done an outstanding job with her cast, and the show is certain to be a favorite with adults and children alike.

The cast is headed by the zany, irrepressible Kevin Caravalho, as The Cat in the Hat. Just like Seuss' favorite feline, Caravalho is a whole bag of tricks, mugging, ad-libbing - at least it sounds like ad-libbing - and drawing the audience into the fun.

The Cat is accompanied by his cartwheel-turning apprentices, Thing 1 (Linnea Lampinen) and Thing 2 (Devon Hayakawa).

The narrative centers on Horton the Elephant (Kyle Hadley), who discovers the microscopic world of the Whos living on a speck of dust, and then tries to find them a safe home.

Hadley touchingly brings the elephant's innocence and vulnerability to life, as he faces the ridicule of friends who treat him with scorn, because they cannot hear the Whos.

Kay Hight is Mayzie LaBird, who can't be bothered hatching her own egg, and tricks Horton into doing it for her; this severely hampers his attempts to find a safe place for the Whos.

Ana Chan sparkles as JoJo, the child who follows The Cat and later moves into the world of the Whos; her enthusiasm is infectious. She and Hadley have a sweet duet, 'Alone in the Universe,' as they face their respective situations.

Jeffrey Lloyd Heatherly makes a tremendous impact as Gen. Genghis Kahn Schmitz, singing the fun patter song, 'The Military,' along with the Mayor of Whoville (Jason Hammond) and his wife (Erin Renfree-Davis).

Emily Jo Seminoff is Gertrude McFuzz, the one-feathered bird in love with Horton, who longs for a spectacular tail ... and gets it. Seminoff somehow manages to create the facial features of a bird, and her performance is wonderful.

Deborah Hammond is outstanding as the Sour Kangaroo, although her character doesn't add much to the storyline, and her musical numbers are quite a departure from the rest.

Steve Isaacson does double-duty as The Grinch and Judge Yertle the Turtle, and is at his best when dressed in a green Santa suit.

The large cast is divided into various groupings: Whos, Cadets, Hunters, Sneetches and so forth. The Wickersham brothers - Kendyl Ito, Matthew Kohrt, Ryan Lee and Cole Yambrovich - are wonderfully athletic, and their antics are enhanced by their neon-bright costumes.

The show's music isn't the best, but the staging and choreography more than compensate. The sets are minimal, but not much is required with such a large cast.
Posted by Bev Sykes at 3:16 PM

Thank you for the lovely review of Seussical. I personally find that your reviews contain information that help me decide if a show fits with my interests - for somehow you always manage to blend the gist of the show with your critique. So, even if I disagree, I still know what I'm getting into. I have also appreciated how you tend to be generous with younger actors - and I'm sure the young performers in the cast are totally jazzed about the review. Jeni Price

I agree with every word. Good show!

Here are examples of ringtones that I give you for reference and installation and then leave a comment for us:

Your comments will help us improve the ringtone better and bring new insights into the world of ringtones. thanks for your care