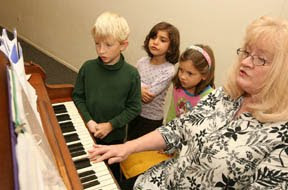 By her own account, Mindy Manville has taught music to 'thousands' of Davis school children.

It's therefore fitting that she should be honored by the Davis School Arts Foundation, with this year's 'Harmony in Our Lives' award.

Lindsay is the whole reason Manville began working with children in the first place, back in 1997.

'There was a dearth of things for her to do,' Manville recalled. 'You could find 'kinder' music, but that ended when the children became 4 or so, and then there was nothing again until they could try out for Davis Musical Theatre Company, or something like that. That was the age group I was trying to fill, and that's what I still do.

'It bridges the gap between kindermusic and DMTC, although I start them at age 1.'

Lindsay was 4 when her mother set up the Davis Children's Choir.

'It just snowballed from there,' Manville said. 'People heard about me in the schools, and I started doing even more work.'

Not content to work with only the youngest children, Manville began to expand her range. She now runs programs at the Davis Art Center for all ages, from toddlers up to 9-year-olds.

'Jackie Stevens, then director of the Art Center, happened to live at the end of my block. I said 'You know, I do this little choir at the city's alternative rec building, and it would be great if I could do it at the Art Center. I could get a piano for you!' '

'During the day I'm just running around from school to school, because I teach an entire music program for five grade levels at Marguerite Montgomery School. That includes rhythm, movement and music education, and then we put on a spring show.'

She also teaches one or two grade levels at four other schools.

Her programs can be presented in either English or Spanish.

'I sort of speak Spanish, and I can write in Spanish,' she said modestly, 'so I always write three or four songs every time we do our social studies show at César Chávez School.'

Wait ... writing her own music?

Indeed. When she first began to put on mini musicals, she did Disney shows such as 'The Lion King' or 'Mary Poppins': stories and music familiar to most children. But she quickly discovered that dealing with Disney's legal department was more of a hassle than it was worth.

'They said it was OK if I was doing a choir-type setting, but not in a musical theater-type setting. You don't want to get into legal turmoil with Disney.'

When Disney stopped returning her calls, Manville decided to just write her own music. (Of course!) She had studied piano from the age of 6, and went all the way up through the national audition process. This experience gave her a solid background in composing.

'I now compose almost everything I put on.'

She not only writes the music and the lyrics for her shows, but - mindful that most of her students are too young to read - she records cassette tapes to help them learn the music.

'Since repetition is the key to everything I do, I don't send my kids home without a tape of every song. They normally haven't heard them before, since I've written them!'

Every child receives a tape and a lyric script; parents are supposed to help if their children can't read yet.

'I have dads from my preschool and toddler choir classes who say 'I know every one of those silly little songs,' because it's the only thing their kids will listen to.'

Many of Manville's students stay with her for years. In fact, her current dance instructor - Caitlin Coppinger, now a UC Davis sophomore - was in Manville's very first music class at Patwin School.

Daughter Lindsay now is in the Davis High School Madrigals. When her mother recently visited the class, she discovered that half of this year's Madrigals once were her students.

'The Davis community is blessed to have Manville nurturing our young voices,' said Colleen Connolly, president of the board of directors for the Davis School Arts Foundation. 'I had the privilege of working with her on the Davis School Arts Foundation board of directors, and my son was lucky enough to sing in two of her choirs.

'I'm thrilled she's being recognized with this award. She's a treasure.'

This year's Harmony in Our Lives benefit concerts, at which Manville will be presented with her award, will take place at 1:30 and 4 p.m. Sunday at the Davis High School Brunelle Performance Hall, 315 W. 14th St.

Admission to each show is $10 general, $5 students; advanced tickets are available at The Avid Reader, 617 Second St., Davis. Tickets also will be available at the box office one hour before each performance.
Posted by Bev Sykes at 12:28 PM